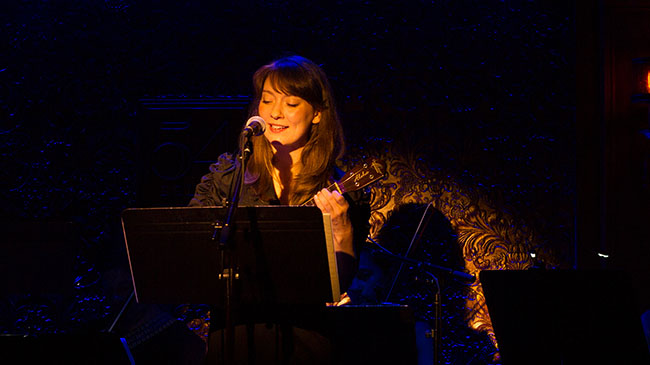 Billed as “part memory play, part gin-soaked vaudeville,” the work is a fictionalized imagining of the lives and adventures of writer F. Scott Fitzgerald and his wife Zelda, celebrity icons of the 1920’s Jazz Age.

Taking on a complex subject

Baugher was drawn to the subject matter after hearing an interview with Maureen Corrigan, a literary critic and Fitzgerald scholar whose book on “The Great Gatsby” touched upon the author’s sense of personal failure. Though celebrated today as a genius, Fitzgerald struggled to find–and hold on to–literary success during his lifetime, while his personal life was troubled and his marriage shadowed by his alcoholism and his wife’s schizophrenia. In Baugher’s play, the couple’s tempestuous and very public relationship is chronicled in musical episodes that interweave themes of love, celebrity, mental illness, addiction and the American definition of success.

The performance is part of York Theatre Company’s Developmental Reading Series. This series is an outgrowth of the company’s “New, Emerging, Outstanding” (NEO) program in which up and coming writers are given a chance to have a musical they are working on be seen in a reading using top New York talent, both on stage and behind the scenes. Baugher was selected for the program last year, one of only a handful of writers so honored. As part of the program, she was assigned a Broadway mentor, in her case Michael John LaChiusa, ground-breaking composer and lyricist and Emmy-winning and Tony-nominated creator of such musicals as “The Wild Party” and “Giant.”

The next step was a performance of the music in a concert format last summer, with songs uploaded to YouTube. This week’s performance will mark the first time the play in its entirety, dialogue as well as songs, will be performed.

“The goal is that the time spent in rehearsal, working on the show for the reading, will help me whip it into presentable shape so that it can move on to the final step, which would be a full production,” Baugher said.

An atmosphere of constant creativity

Baugher grew up in the Louisville area and graduated from IU Southeast in 2008. She relocated to New York City and earned an MFA from the NYU/Tisch Graduate Musical Theatre Writing Program in 2012.

While “Phantom of the Opera” was Baugher’s overwhelming epiphany, she traces her love for musical theatre to the influence of her grandfather and father, both of whom were creative spirits who fostered a passion for radio, movies, music, drawing and other arts.

“That sense of constant creativity is something that sticks for life,” Baugher said.

During high school, she took part in a summer program at NYU’s Tisch School of the Arts, spending a month studying with working writers and learning the real workings of her craft.

“It was life-changing,” she said. “The response I got from teachers was, ‘Keep going,’ and I did.”

A keen observer of the world

Recalling Baugher’s humility, sense of humor and vast vocabulary, Reid also draws attention to the qualities that destined her for success as a playwright.

“She has great insight into people’s behaviors and personalities,” Reid said. “My guess is that she has always been a keen observer of the world, and mastered the ability to shape those observations into words.”

Reid found ways to accommodate Baugher’s combination of gifts and aspirations within the communication studies program.

“Recognizing the uniqueness of my goals, she helped me craft a curriculum and a capstone project that made sense for me,” Baugher said.

That capstone was a one-act play, “Sevens,” that was read at Actors Theatre of Louisville and later performed by Specific Gravity Ensemble, also in Louisville.

“These were both wonderful experiences that I would not have had without Diane Reid’s steadfast belief not only in me but in the work I was doing,” Baugher said.

The word “work” features prominently in Baugher’s view of writing. She emphasizes the need for elbow grease and persistence, and admits the career often portrayed as glamorous–witness the life of Fitzgerald–isn’t for the faint of heart.

“You do it only if you have to, if there’s a story you need to tell or a song you need someone to hear,” Baugher said.

That drive propelled Baugher to New York City, where she was challenged to grow as a person and artist, and commit fully to her priorities. She credits the city for helping her get out of her comfort zone, exposing her to massive amounts of theatre, and helping her build a network of peers and mentors to both encourage and push her.

“The work is the reward, so if you go into it with a willingness to learn, to listen and to be wrong, and surround yourself with people who are smart and kind and willing to challenge you, you’ll be amazed at the places you can go,” Baugher said. “But you have to want to do the work.”

Along the way, Baugher’s work has been performed at the Duplex, the Laurie Beechman Theatre, Bard College at Simon’s Rock, Seoul Institute of the Arts (South Korea) and Two River Theater Company, among others. The upcoming staged reading at 54 Below is another opportunity for Baugher to advance

“Ultimately what it represents is a show of faith in me and the work,” Baugher said. “Whether it be my family or the NYU faculty or the IUS faculty or, now, an off-Broadway theatre, at each turn, someone has said, ‘Keep going.’ And that’s all I need.”