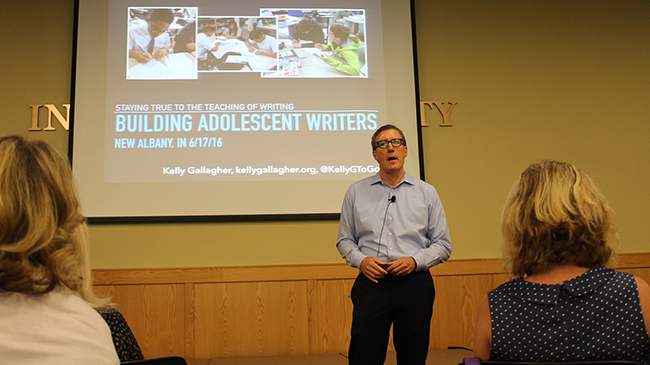 (NEW ALBANY, Ind.)—Kelly Gallagher, noted literacy educator, headlined the 2016 IU Southeast Writing Project (IUSWP) annual conference, bringing a wealth of insight and experience to a workshop that attracted over 135 teachers from the Kentuckiana region to the IU Southeast campus.

The event capping the project’s 14th year also marked the passing of the torch from longtime IUSWP director Dr. Kevin Sue Bailey, retiring after 41 years at the School of Education and 14 years as leader of the IUSWP, to incoming director Dr. Mary Ann Parker.

For the assembled teachers, the conference was an opportunity to share best practices with colleagues and acquire new perspectives and techniques that will directly impact performance in the classroom.

The National Writing Project (NWP) was founded in 1974 in the Graduate School of Education at the University of California, in Berkeley, Calif., with the goal of improving the teaching of writing through professional development programs for educators. Today it comprises a network of chapters—called sites—at nearly 200 universities in 50 states, the District of Columbia, Puerto Rico and the Virgin Islands, bringing best practices in the field to more than 100,000 teachers every year. 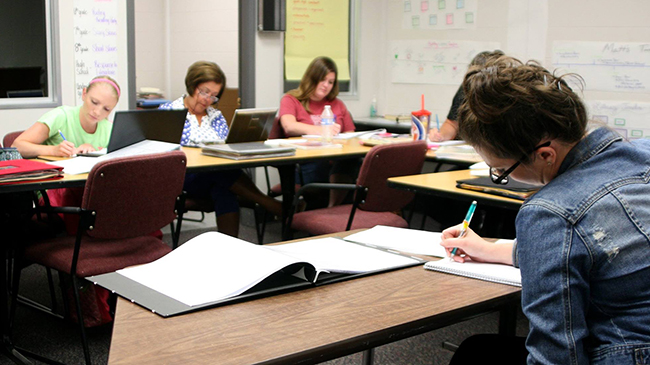 More than 200 teachers have taken part in the IUSWP Summer Institute and Advanced Institute, polishing their own writing skills while learning new approaches to the teaching of writing. Photo by Rachel Rice.

The basis of the model is breathtakingly simple: Teachers-teaching-teachers, in workshop-style “institutes” in which each participant models a demonstration lesson that integrates best-practice writing and the integration of reading. Each institute Fellow receives coaching prior to the lesson and group feedback immediately following the lesson so that each demonstration exemplifies both the skills and craft of good writing. And there is plenty of writing. Over the course of two weeks, participants in the institutes write short and long assignments, revise, share, critique and present. They reflect, record and synthesize. Simply put, they go back to school, and come out with new impulses for their own students.

IU Southeast became an NWP site in 2002 at the suggestion of Bailey, who had previously visited the NWP office in Berkeley, as well as writing project sites in Indiana and Kentucky. She was responding to feedback from local superintendents and then School of Education dean Dr. Gloria Murray on the region’s most pressing educational needs. She received the go-ahead, and applied for an NWP grant. IU Southeast received that grant—one of only ten awarded nationally that year—and the first institute was held in the summer of 2003.

“I knew it was going to be a life commitment for me,” Bailey said. “The Writing Project has had a profound effect on my own writing, on my thinking and on the way I teach teacher candidates to be teachers of writing.”

True to the project’s networking model, she immediately engaged Tammy Nuxoll and David Stoner as co-directors. Nuxoll was a veteran of the Ball State University NWP site, and coached elementary literacy in Charlestown, Ind. Stoner had attended the prestigious writing institute at Breadloaf, N.H., where he worked alongside various authors whose books the IUSWP has since used as a knowledge base for its practice. Others came aboard soon after, to assist with crafting and running the various program components.

“This is the most powerful model for literacy,” Nuxoll said. “From working with peers to demonstrations, from sharing research to solving problems, all the way to the network it creates. Teachers take what they have learned back to their schools, where there is a plethora of other teachers they can collaborate with.”

According to Bailey, the project has generated well over 1,000 hours of graduate credit at IU Southeast and supported participants with fellowships each year to offset the cost, a double benefit for the university.

In addition, all IU Southeast English education undergraduates are required to attend, and present at the IUSWP conferences, sowing the seeds of abiding contribution. Bailey has led also groups of students and teachers to NWP conferences around the country. These are paired with conferences of the National Council of Teachers of English (NCTE), giving attendees even more opportunities for professional development. 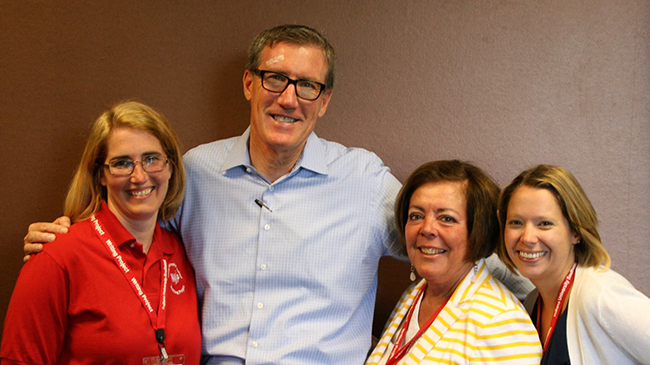 The project has also had a significant and lasting impact on the community by giving teachers the tools and inspiration to raise student performance in their classes.

“We have invited the public in, and we have gone out to the public,” Bailey said.

For example, the project provided Bridgepoint Elementary School in Jeffersonville, Ind. with extra literacy help in the form of professional development for teachers. By virtue of a $20,000 grant award, IUSWP generated income for its site by designing a full year of demonstrations for the Springs Valley Community Schools Corporation in French Lick, Ind.

“I’ve seen test scores in schools that had bleak outlooks and at-risk students go through the roof,” said Bailey.

According to statistics compiled by IUSWP veteran/intern and Fulbright recipient Jazmin Trejo Oliver, local students in classes taught by teachers who have taken part in the IUSWP classes scored 12 percent higher on the Language Arts ISTEP test than their peers in classes taught by teachers who did not attend. Moreover, the top-scoring IUSWP teacher’s class scored 26 percent higher than the lowest-scoring class not taught by an IUSWP participant.

Beyond the numbers, the program has delivered literacy experiences of a transformative nature to students and teachers in the community. One of Bailey’s fondest memories is bringing African-American writer Jacqueline Woodson, author of young adult fiction and a winner of the Coretta Scott King Award, a Newberry Honor and the National Book Award, to the conference.

“These places don’t have a lot of African American role models,” Bailey explained. “We wanted those students, who are mostly white, to experience this kind of diversity.”

In turning the project over to Parker, Bailey is proud to have put teachers first, to have made them feel special in an atmosphere of large classes and shrinking budgets. Over the years this has created a broad and tight-knit network of educators in the community that look to the IUSWP as a source of continual inspiration and assistance. This year’s project drew educators from 10 schools in seven districts, a testament to its reach. Such is the success of her program that when the call went out to teachers for volunteers for this summer’s advanced institute—teachers enjoying a long-awaited and newly abbreviated vacation—Bailey received only positive responses.

Being literate in the world

For conference headliner Kelly Gallagher, there are two types of teachers: “those who teach for 20 years, and those who teach the same year 20 times.” Gallagher belongs to the former type. He is a restless innovator with a drive to nurture writing skills in students that serve them as citizens and human beings. His most recent book, In the Best Interest of Students, was the featured study of the 2016 IUSWP conference, and during his very full day at IU Southeast, teachers from the region moved through it with him in a hands-on workshop that challenged them to embrace the struggle and rewards of writing.

More than a question of meeting Common Core standards, Gallagher described the role of teachers as helping students become literate in the world, mastering a skill that is fundamental to career readiness and personal growth.

Gallagher’s impulses—from his emphasis on narrative writing to his push for increasing the volume of reading and writing demanded of students—resonated with Rachel Rice, who teaches English and photography at Atherton High School in Louisville, Ky. She is an alumna of IU Southeast (2006), an IUSWP participant and presenter since 2009 and now the project’s official photographer and facebook-page administrator.

“I could be spending my summer by the pool, but then I wouldn’t be coming back to school in the fall refreshed with new ideas,” she said. “I don’t want to teach one year for 20 years. I want to take what I learn here and apply it in the classroom right now.”

After nearly ten years in the program, Rice feels that her literacy toolbox is almost overfilled, but remains excited about what is yet to come.

“No matter how long you’ve done this, there are always new ideas coming up.”