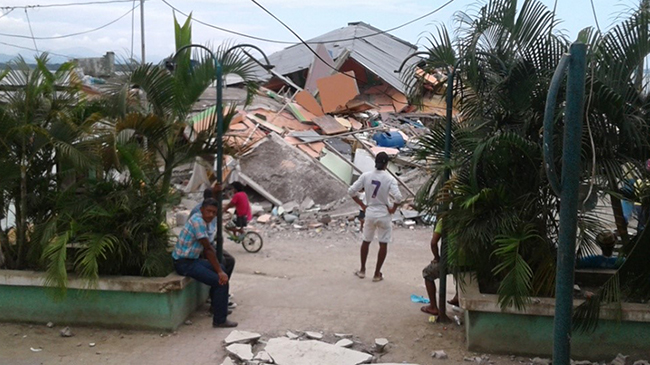 The city of Chamanga, Ecuador, lies in ruins after the 7.8 earthquake of April 16, 2016. Photo courtesy of Thomas Kilian, GIZ.

(NEW ALBANY, Ind.)—When 14 IU Southeast students and faculty board an American Airlines flight to Quito for the annual Summer in Ecuador program this Saturday, their luggage will contain some unusual gifts: water purifiers and chlorine makers.

The devices are destined for quake-stricken regions of the South American nation, where they will be put to use by local nongovernmental organizations and government relief agencies to bring potable water and purification technology to people struggling to survive in the aftermath of the April 16 disaster.

The delivery is just the latest tangible evidence of IU Southeast’s unfolding commitment to help the shattered nation, and is a testament to the efforts of School of Education faculty Magdalena Herdoiza-Estevez to galvanize relief efforts within the IU system and the greater Louisville community.

In the evening hours of April 16, 2016, an earthquake measuring 7.8 on the Richter scale struck the northern coastal region of Ecuador, leaving 660 dead and nearly 28,000 injured. Cities, towns and villages were devastated and over 26,000 people rendered homeless. Entire communities were effectively cut off from the outside world as the region was rattled by countless aftershocks, two of which measured 6.8 in intensity.

Magdalena Herdoiza-Estevez and her husband Milton learned of the quake while driving home from Indianapolis where they had just delivered a presentation on Ecuador to the Indiana Foreign Language Teachers Association.

A native of Ecuador, Herdoiza-Estevez is the driving force behind the Summer in Ecuador program, which for the past 15 years has brought IU Southeast students and faculty to her homeland, where they experience a teaching and service learning immersion. Out of this program, a special bond has been forged between IU Southeast and the communities served. One former colleague, Amy Freyn, now lives in Quito. And it was she who gave Herdoiza-Estevez a sense of the unfolding tragedy over the phone. 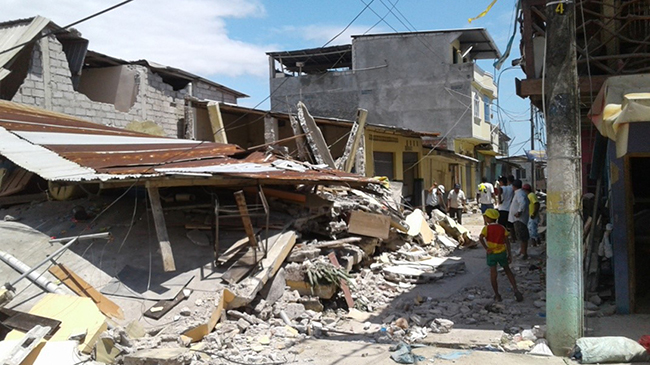 While it was easily and quickly understood that the Ecuadorian government, the International Red Cross, UNICEF and other agencies were mounting comprehensive relief efforts, the women felt called upon to help.

“We both felt that something had to be done, and that IU Southeast should be part of it,” Herdoiza-Estevez said.

In the following days, she and School of Education colleagues Dean Doyin Coker-Kolo and Dr. Gloria Murray, herself a three-time participant in the summer program, began to “knock on doors,” as Herdoiza-Estevez put it.

Wherever they went, they found support driven by an appreciation for the relationship between the campus and the stricken communities.

That appreciation found expression in a letter of support from IU President Michael A. McRobbie to Rene Ramirez, Secretary for Higher Education, Science, Technology and Innovation in Ecuador. President McRobbie had visited Ecuador just weeks before the earthquake, and drew attention to the bond between the country and IU Southeast, as well as to student-led aid efforts on the Bloomington campus.

It was also expressed in a fundraising appeal from IU Southeast Chancellor Dr. Ray Wallace, to members of the campus community.

“I am so proud of our campus community who have answered the call to help with the relief effort in Ecuador,” Wallace said. “Our faculty and staff are truly committed to ensuring our students graduate with a committed global outlook.” 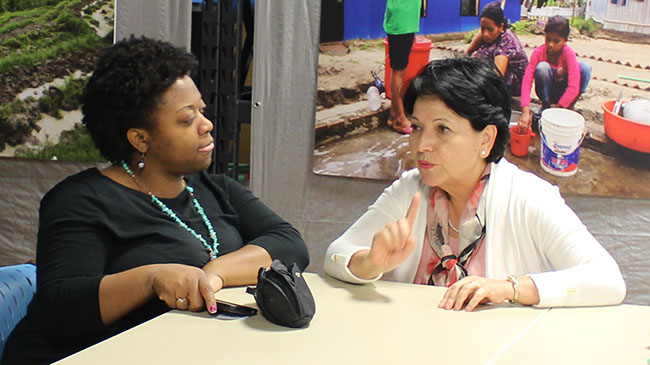 Over her many years of teaching and service at IU Southeast, Herdoiza-Estevez has built a network of colleagues and collaborators in the region, and this network has been critical in responding to the earthquake.

She is the initiator of ESL/ELL programs in Southern Indiana public schools, as well as the architect of the degree programs that train education students to staff them. She is also the founder of the New Neighbors Program, which has not only brought IU Southeast into the consciousness of the region’s Latino population, but has instilled an awareness of that population’s needs in the mind of the campus. Finally, she sits on the board of Sister Cities Louisville (SCLOU), and it so happens that Quito, Ecuador, is a sister city to Louisville, and that Herdoiza-Estevez is a co-chair of that committee.

Within days of the earthquake, Mark Hogg of WaterStep, the Louisville-based nonprofit specializing in providing safe water to disaster-stricken communities, had stepped up as the leading convenor for organizations and individuals seeking to help. At the first meeting, Herdoiza-Estevez articulated a basic approach.

“Any response must be practical and strategic, focused on immediate needs but also geared to the long-term,” she said.

The group agreed on a basic vision to serve the relief operation: “Act on things that are essential, affecting real people, with solid partners that will guarantee that whatever we do is effective to improve the condition of those who are affected.”

A nucleus was formed involving Sister Cities Louisville, IU Southeast and WaterStep. SCLOU and IU Southeast would focus on fundraising, while WaterStep would activate its own network of donors in foundations and other sources, and supply its water purification and chlorinators for shipment.

It was decided that students of the Summer in Ecuador program would carry the units with them, to reduce the cost and time involved in shipping. The only missing link was the support network on the ground in Ecuador. WaterStep had a small group in the country, but a large presence in the stricken region was lacking.

Through her own contacts, Herdoiza-Estevez eventually reached Thomas Kilian, a development worker in climate change and biodiversity with the German corporation, Society for International Cooperation (GIZ), which supports the Ecuadorian Ministry of Environment in improving the conditions of people who earn a livelihood from mangroves. Kilian had further contacts at the village level at the Progressive Fund for the Ecuadorian People (FEPP), a large organization that works to provide social support to the rural population. The Ministry of Health also provides services at the local level.

Drawing information from this network, Kilian began to supply regular, accurate, detailed reports of conditions in the region which helped the Louisville group tailor their response to actual known conditions, and also provided them with a distribution network for the purifiers on the ground.

At the moment, according to Kilian, the population now in camps has received water only via plastic bottles, creating mountains of waste.

“There is no safe water for all activities within the camps, and that is causing diarrheal diseases and skin afflictions,” said Kilian.

Working together, the teams gained a realistic view of local needs that helped them complement the vast outpouring of support from Ecuadorians and their government.

“Mark Hogg of WaterStep and I had a meeting with Thomas Kilian via skype that was amazing,” Herdoiza-Estevez recalled. “We had maps in front of us, and the two teams were able to locate the towns on the ground that needed the most help.” 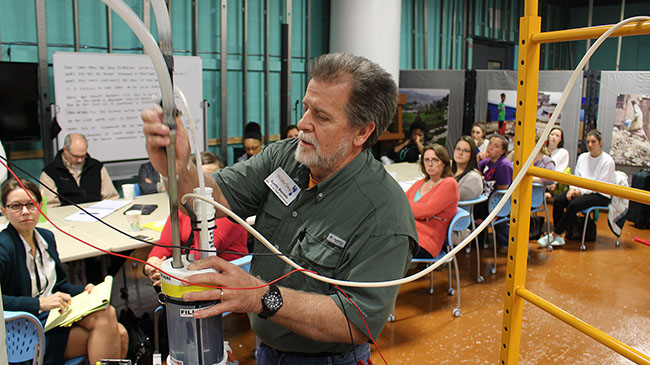 Kurtis Daniels, WaterStep director of field operations, demonstrates the use of water purifier to IU Southeast students and faculty who will be transporting the units to Ecuador.

Meanwhile, here at home, many efforts were underway that derived directly from personal relationships established over the years by Herdoiza-Estevez and her students. Some of the more visible have been the following:

—The Hope for Ecuador Benefit Concert organized by Ecuadorian friends raised over $5,000 for SCLOU and WaterStep’s effort.

—The Hispanic Connection of Southern Indiana, a New Albany, Ind.-based nonprofit that supports Hispanic immigrants, has held a garage sale to raise funds—the mother of Quita Rose, director of ESL programs for New Albany schools and also a member of the summer program, is the director of HC.

—La Casita Center, a Louisville nonprofit that works to enhance the health and well-being of the local Hispanic community, has stepped in to organize, package and ship the goods destined for Ecuador.

As the date for departure drew nearer, last-minute adjustments were made, shipments were sent, trainings held. Once the units have been delivered by the IU Southeast team, the specialists from WaterStep will travel to Ecuador and begin training relief agencies in the installation and use of the equipment. 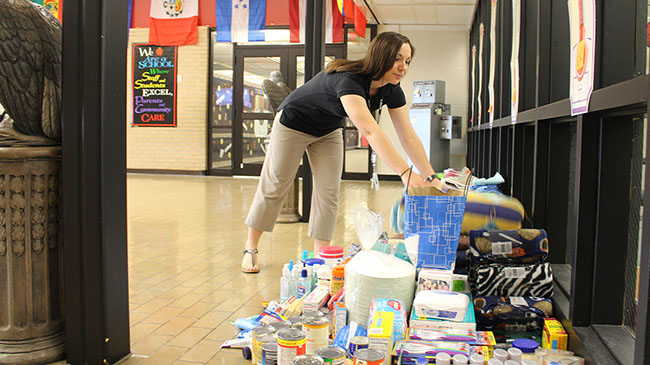 In the flurry of logistics—be it shipping canned food and blankets or meeting to delineate roles and responsibilities or the trying to understand a relief worker on the other end of a patchy phone call or navigating bureaucratic obstacles to the importation of chlorinators—it might be easy to lose sight of the ethic that drives all this effort.

Yet that never seems to happen. Instead, the participants in this broad action, many of whom are former students from the program, draw upon reserves of inspiration and solidarity formed during their time in Ecuador.

The flame of this ethic burns especially bright in San Gerardo, the Ecuadoran village where the summer student groups perform their service learning.

The people of San Gerardo are poor, yet students come away from their time here feeling gratified at having contributed their knowledge to those in need, but also humbled by the generosity of those who have next to nothing.

Many come away with a deeper sense of what it means to be a teacher, and a person.

“After this trip I realize I now have a clearer understanding of a culture different than the one in which I have grown up,” said Kelly Allen, who visited San Gerardo in 2015 and now teaches at Northaven Elementary School. “I also feel this has been a call to action.”

For Justin Yeazell, a member of the 2015 trip, that call took the form of a new view of his role in the classroom and beyond.

“Working in San Gerardo has helped me better understand the responsibilities I have as a global citizen,” he said. “It has made me realize I have a responsibility to help those in need.”

In keeping with that vision, this year, one of the water purification units from WaterStep will go to San Gerardo. Safe water will be added to a significant project that the 2015 and 2016 students had designed for the community. This is materializing through the students’ own fundraising initiatives, and with significant funds raised by a family friend of Herdoiza-Estevez in the United Kingdom who had visited San Gerardo, and was deeply impressed by the work being done there. Several of the IU Southeast students have been trained in the installation and use of the water equipment, and this knowledge will be passed to those who come after, to make sure that the village continues to benefit from this donation.

“With help from so many, we are reaching the end of our preparation for what we expect to be a successful delivery of equipment meant to bring safe water to the victims of the earthquake,” said Herdoiza-Estevez prior to the team’s departure. “Tonight the students pack their suitcases, taking along the nervousness of a yet unfinished process and the excitement of becoming ambassadors of hope and solidarity who proudly represent our university.”