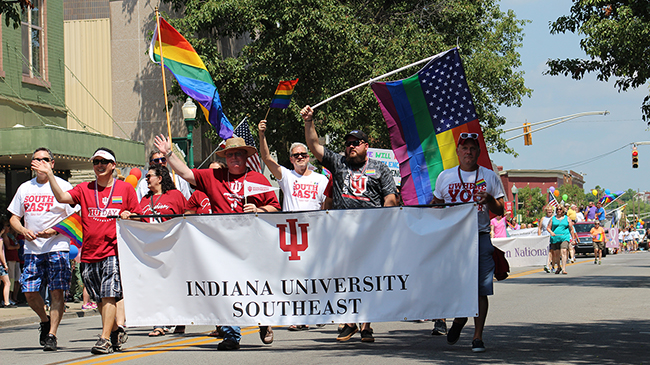 The festival kicked off with a march through historic downtown Jeffersonville, past the original home of what has since become IU Southeast.

The first-ever parade included 17 businesses and organizations from the area, as well as individual community members.

It ended at Big Four Station, where 53 local organizations, including IU Southeast, welcomed visitors to informational and vendor booths until 10 p.m. Performances by the Jake Parker Band and other local musicians enlivened spirits throughout the afternoon and evening.

IU Southeast was a major sponsor of the trailblazing event, attended by an estimated 1500 people.

“IU Southeast’s participation, sponsorship, walking in the parade and vendor booth all mean that the university is a beacon of leadership in this region,” said Nicholas Moore, IU Southeast alumnus and marketing director of the festival. “The university is delivering on its commitment to support cultural diversity in the classroom and the community.”