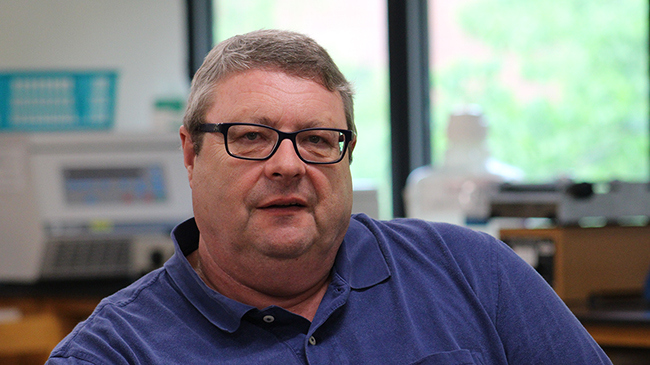 (NEW ALBANY, Ind.)—Dr. James Hollenbeck, professor of science education at IU Southeast and Fulbright Research Chair to Canada this past fall, is on the road again, this time to China, where he will spend two weeks teaching Chinese students about American educational practices at the invitation of Chinese colleagues in the field.

“China is looking to modernize their educational system, and are very interested in learning how Americans teach,” Hollenbeck said.

Hollenbeck will present lectures at Shannxi Normal University, an institution of over 40,000 students known as the “Cradle of Teachers” in Northwest China due to its renowned programs for training teachers and educational administrators at the secondary and university levels.

The university is located in Xi’an, the first capital of China and home to the famed army of 8,000 life-sized terracotta warriors and hundreds of other figures buried with China’s first emperor, Qin Shi Huang in 209 BCE.

In these ancient surroundings, Hollenbeck will focus on topics of the future: common core, the application of problem-based learning, the flipped classroom and the evolution of education in the U.S., all topics that give insight into novel aspects of the American teaching and learning style that his Chinese counterparts are keen to explore.

The visit stems from Hollenbeck’s association with Dr. Xiaoduan Chen, leading professor in the Department of Curriculum and Instruction at Shannxi, whom he met at a conference in London over a decade ago. The two scholars kept in touch over the years. Last summer, Chen visited the campus of IU Southeast, met Chancellor Dr. Ray Wallace and IU Southeast education faculty, spoke to IU Southeast classes about the history of Chinese science and technology, and spent the Fourth of July weekend as guests of Hollenbeck and his wife, gaining an in-depth acquaintance with American culture. He also toured area schools and met with several principals and community leaders.

From this fruitful experience arose the idea for Hollenbeck’s trip to Shannxi, and also the plan for a reciprocal visit of Shannxi graduate students to IU Southeast, potentially as early as the summer of 2017.

According to Hollenbeck, his Chinese colleagues are fascinated by aspects of the U.S education system that make this country truly unique. Among these are local control of education, an anomaly in a world of nations with centralized education ministries. Also, the ability of the American educational system to nurture a single national identity within a population of dizzying ethnic diversity and divergent backgrounds fascinates educator colleagues from a society, China, that also boasts many cultures and many languages.

“We’re a nation built on a philosophical basis,” Hollenbeck said. “To a certain degree, the Chinese are still in the process of building their nation as one China.”

Hollenbeck will be in China for 16 days. During that time, he will not only lecture, but visit officials in Beijing, tour classrooms and work with Shannxi faculty colleagues on a joint research project on the integration of critical problem solving into education.

“I’m hoping to introduce American educational processes and why our system works, and also to learn what makes Chinese education unique,” he said. “I’m hoping to bring back from them as much as I give.”

Hollenbeck sees this growing partnership between IU Southeast and Shannxi Normal University as natural, given the reputation of both institutions for producing quality educators. He also sees it as a unique opportunity for collaboration in research and student exchanges in both directions.

“The possibilities are rich for both universities,” he said.