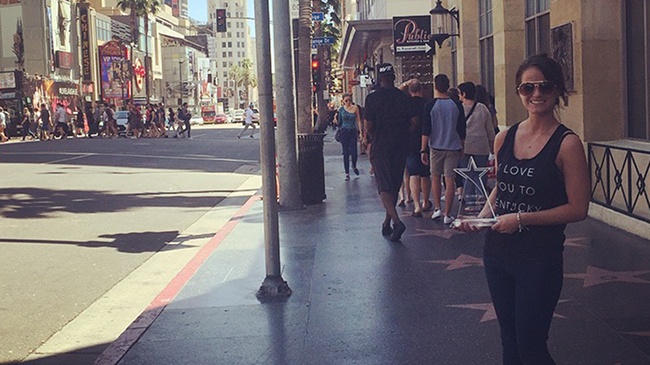 Liz Rozengard on the Hollywood Blvd. Walk of Fame, with her Ria’s Rising Stars award.

“I was definitely hyped,” said Liz Rozengard, who met King last month during the Worldwide Radio Summit at the historic Hollywood Roosevelt Hotel in Hollywood, Calif.

Rozengard, a 2016 graduate in communication studies, attended the summit as the winner of one of only three inaugural Ria’s Rising Stars scholarships, sponsored by All Access Music Group, DMR/Interactive and A&R Worldwide, three heavy-hitters in the world of broadcasting.

The scholarship was established this year to honor the memory of Ria Denver, founder of All Access, the comprehensive media platform for the music and broadcasting business. It helps to forward the careers of those who have a true passion for broadcasting.

A passion for radio

Rozengard certainly has that passion. She currently works as a DJ on two different stations, WFKY/WVKY and WSTV, spinning tunes for both country and adult contemporary audiences while commuting between home in Louisville, school in New Albany and the radio mic at Cap City Communications in Frankfort, Ky.

“Liz is intelligent, curious, outgoing and funny,” Kaufman said. “She is highly motivated to become a professional in the radio industry, and the summit was an excellent opportunity for professional development and networking.”

The Worldwide Radio Summit brings together members of the global radio industry for dialogue, networking and an exploration of the present and future evolution of all forms of radio, including terrestrial, digital, streaming, satellite, podcasting and more, according to the conference press release.

At the summit, Rozengard plunged into the midst of the major leagues.

All Access Music Group is the parent company of AllAccess.com, a digital publishing platform focused on the music industry. Founded by Joel and Ria Denver in 1995, AllAccess.com is the web’s largest radio and music industry community, delivering news about these media in all formats, alongside columns, job postings, charts, marketing updates and much more.

DMR/Interactive is a leading strategic marketing consultancy and service provider for the broadcast industry, offering fully integrated marketing solutions that include personalized campaigns via digital, social, direct mail and other channels.

Red Bull in the mini-bar

The tone of the conference was set upon arrival, according to Rozengard.

“There was a mini-bar in the snack room stocked with Red Bull – I knew at that point that it was going to be nonstop.”

The takeaways were nonstop, too. For Rozengard, the summit demonstrated the growing integration between media platforms, and the need for personal branding, in order for individuals to stand out and build a loyal audience. Among her more inspiring and influential meetups: Joel Denver, president and publisher of AllAccess Music Group; Kerri Kasem, multimedia personality and daughter of iconic Top 40 host Kasey Kasem; and Dan Vallie, president of the National Radio Talent System.

The trip was not without its distinctive Hollywood moments, be it soaking up the old-time glamour of the Hollywood Roosevelt Hotel, site of the first Oscars presentation in 1929, finding Marilyn Monroe’s star on the Walk of Fame, or crowding in to glimpse a red-carpet entrance at Graumann’s Chinese Theater that turned out to be . . . a Mary Kay convention.

As for Larry King, she was proud to be one of only a few to have snagged a selfie with the radio star after his keynote.

“I actually got him to smile,” she said of the photo with the reputedly forbidding King.

Putting it all together

Back at IU Southeast in time to walk at Commencement, Rozengard is still coping with culture shock, sifting through the myriad impressions and impulses, looking to apply what she has learned to her own craft.

“I can see now that even though I’m new and working in a relatively small market, there are a lot of techniques from leading radio personalities that I can implement right here, right now,” she said.

A native of Lansing, Mich. who grew up in Louisville, Ky., Rozengard chose to attend IU Southeast because of its small class sizes and direct access to faculty mentors.

“I like it here because they know you, they care about you, you have a relationship with them,” she said.

She discovered her true calling while in communication studies at IU Southeast, during an internship at WDJX in Louisville. While she had always been something of a “radio nerd,” it was the internship that put her in a position to be able to say, “This is it.”

“Everyone in radio is like me: kind of loud and quirky and outgoing,” she said.

She credits Kaufman with helping her to focus on mastering the technical skills that matter, while also broadening her vision of professional possibilities in the field.

“The communication studies program allowed me to become more confident and knowledgeable,” she said, drawing attention to specialized work in speaking, pacing and vocal fluctuation that directly impacts her on-air success. “The speeches and group work have made me a much better staff member.”

Now working in the industry, and with the context gained from the summit, she has a clearer picture of what her own show would be like: an eclectic mix of music, with topical information that is relatable to her generation, in a voice that is truly authentic.

“You have to be yourself,” she says. “The audience always knows when you’re being fake.”

For Rozengard, a “people person” with a knack for being at ease and putting others in the same space, radio is the ideal medium, a gathering place around what she likes best: music and community.

“It’s exactly where I’m supposed to be,” she said.