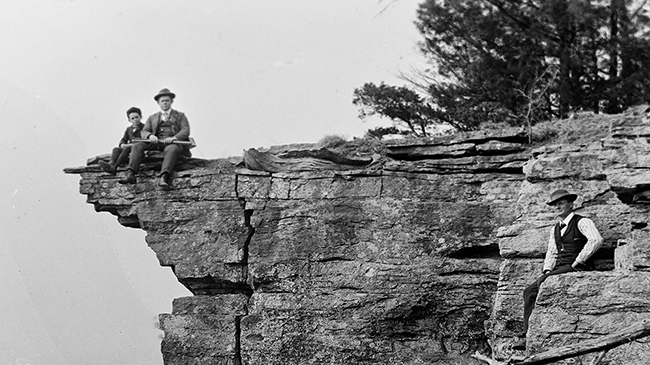 (NEW ALBANY, Ind.)—It reads like an episode of “Antiques Road Show”: a man pays a few bucks for a handful of glass photo negatives in an out-of-the-way shop in Arkansas that turn out to have great historical value, resulting in an exhibition and a book.

The photos found by Wallace are featured in a new book, “Van Buren,” by Tom Wing, part of the Images of America series from Arcadia Publishing. It tells the story of Van Buren, Ark. largely in historic photos that present a compelling portrait of the community from its foundation through recent times.

Treasures in a box

The story of the negatives began in 2013. At that time, Wallace was provost and senior vice chancellor at the University of Arkansas, Fort Smith. One Saturday, Mrs. Susan Wallace proposed an antiquing trip to nearby Van Buren, a picturesque town across the Arkansas River.

While she junked, he prowled the periphery. An accomplished photographer, he began browsing for possible photo-related items, with an eye out for antique frames for his own work. By chance his gaze fell upon a distressed cardboard box containing glass negatives.

“You don’t see them much anymore,” Wallace said of this type of technology.

He thought they were probably worthless, but with nothing better to do, he took one out of the box and held it up to the light. Maybe not worthless after all. He bought a few and took a closer look on his own light table at home.

“I wanted to see if they were in good enough shape that would allow me to discern a photo,” Wallace said.

He decided they were worth pursuing and returned to the shop to buy the whole box containing about 40 negatives. He asked the proprietor about the source, and was put in touch with a woman who had about 50 more, all salvaged from the garage of a demolished residence. He bought those, too, for about a dollar a piece. 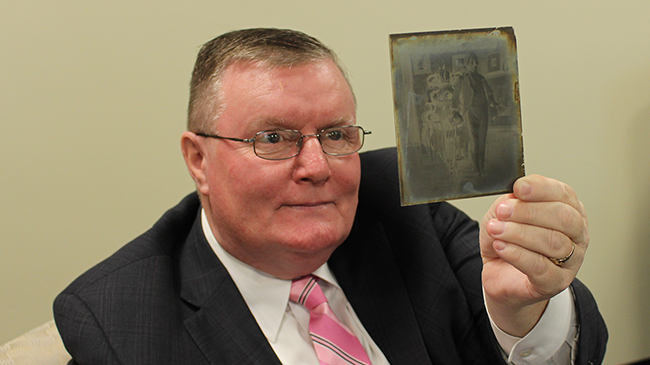 At home in his studio, Wallace cleaned up the negatives and began to inspect their contents.

Slowly a world emerged: children at play, factories under construction, families camping, a woman tending houseplants, a man returning from duck hunting. Ordinary moments rendered extraordinary by a general dearth of surviving documentation on how people spent their time.

From a photo of a man reading a magazine dated 1903, the age of the collection could be established.

“The more I looked, the more I saw that these might have some real significance,” Wallace said.

But how much significance?

To answer this question, he approached Tom Wing, assistant professor of history at UAFS, who taught museum studies and was, as director of the Drennan-Scott historic site, an expert on local history. Wing saw immediately that the negatives had historical value.

Wallace returned to the studio, using a digital scanner to produce digital negatives from which he made prints. He showed the prints to Wing.

“I was completely astounded, first that Dr. Wallace found the glass negatives, second that he was able to manipulate them into prints, and third that we might be able to unlock some of the secrets and mystery they held,” Wing said. “Once we found out they were Van Buren related, I got even more excited.” 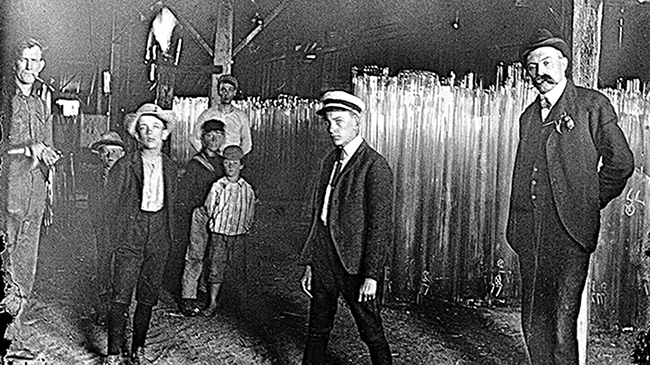 A precursor to celluloid roll-film, glass negatives featured a photo-sensitive emulsion on a piece of specially prepared glass, and were popular in the region between roughly 1870 and the first quarter of the 20th century, according to Wing. Valued for their high detail and resolution, they continued to be used in specialized applications – by NASA, for example – until the advent of digital imaging around 2000.

Even more interesting than the negatives themselves were the glimpses of life in Van Buren that emerged from them.

Van Buren was founded in 1831, and in the middle part of the 19th century, grew prosperous as a jumping-off point for settlers headed west. Located on Arkansas border with Oklahoma, it was an important distribution point for goods via steamboat and railroad. Van Buren attracted industry and continued to flourish into the 20th century, contributing to a wealthy lifestyle that is captured in many of the images.

Wing engaged students in his Interpretive Planning course to do a little digging, and interesting facts emerged. A factory in one of the photos was identified as the first Quaker Oats plant. A clinic turned out to be one of the nation’s first national hospitals for disabled veterans. Faces were recognized, others were matched to names by association in the images.

Wing proposed to Wallace that the photos be presented as an exhibition at the Drennen-Scott historic site. He made this the capstone assignment for his Interpretive Planning students, who sharpened their curatorial skills by researching, captioning, and displaying the photos, in addition to interpreting them at the public opening of the exhibition beside Dr. Wallace.

The exhibition brought attention to the photos, and with attention came more background information on the people and places in the photos. Some of the images turned out not to be from Van Buren at all, yet had interesting backstories. A photo from the 1904 World’s Fair in St. Louis, for example, documents a Japanese pavilion that was controversial at the time. A collection of buildings on a hillside has been identified as Eureka Springs, a spa town in the Ozarks now on the National Register of Historic Places.

One of the biggest mysteries—the identity of the photographer—has likely also been solved. Wing and Wallace believe it to have been the wife of a Dr. Parchman, who owned the house in whose garage the images were found, and who was known to have visited the World’s Fair with his family.

An incredible peek into the past

The images have found an even broader audience with the publication last month of Wing’s book on Van Buren.

The book includes images from a wide spectrum of sources, including the UAFS-Cobb Family Collection, the University of Arkansas at Little Rock Center for Arkansas History and Culture as well as private collections.

Wing believes the photographs provided by Dr. Wallace—all previously unpublished–have added depth and personal interest to the book as records of local buildings, people and places.

“With our phones, we take large numbers of pictures each day that record what we eat, where we go, significant and trivial moments,” Wing said. “These glass images do the same, but they are so rare for the time, and preserved to give us an incredible peek into the past.” 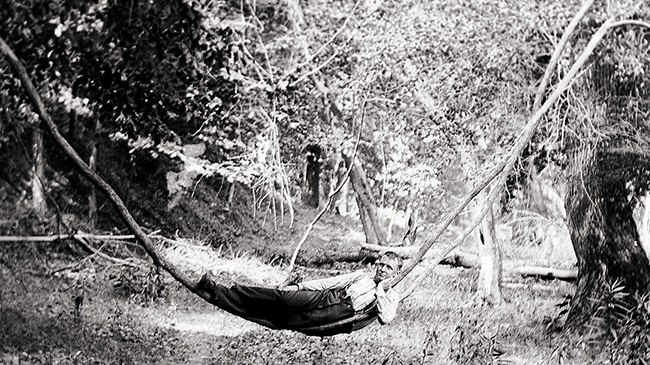 A local “hangs out” in a makeshift hammock near Van Buren, Ark. Photo courtesy of Chancellor Dr. Ray Wallace.

For Wallace, the negatives have played an important role in the ongoing story of Van Buren, bringing together faculty, students, community stakeholders and organizations in an act of collective remembrance.

“I am humbled to have found such a photographic treasure. I enjoyed ‘saving’ these images as best I could and I equally enjoyed the first exhibition we had of these images whereby interested railway historians, cultural anthropologists and the general public got to interact with images over 110 years old,” Wallace said. “While the majority of the photographs had an immediate Arkansas connection, some of the other glass negatives captured very interesting, and not often seen, 1904 St. Louis World’s Fair images. The development of this collection has been a pleasure to share with many interested parties.”

To view all the 1903-04 scanned glass negatives in the Wallace collection, press the slideshow button on Chancellor Ray Wallace’s Photography website.