“I was the kind of kid who would run around outside and pick up things,” she recalled. “My grandfather was a coal miner, and one day I told him that I wanted to be a miner when I grew up. He shook his head and said, ‘No, you have to know dinosaurs, and you have to know computers!’”

Heldt-Davis followed that advice. In 2015 she earned an IU Southeast student research fellowship to study an area of population genetics supporting the ongoing research of Susan Reigler, visiting lecturer and research associate in biology. This week she will present the results at the IU Southeast Student Conference.

Of moths and whiskey

Population genetics is the study of genes—their origins, prevalence and variations—within a larger group such as a local population or even a species.

In the 1950s, the field delivered one of the most enduring illustrations of natural selection at work. Oxford scientist H.B.D. Kettlewell demonstrated that dark-hued variants of the Peppered Moth (Biston betularia) were camouflaged on soot-blackened trees near coal-powered industries, and that this resulted in a survival advantage. When levels of soot were eventually reduced in the environment due to emissions regulations, the tree bark returned to its normal lighter color, and lighter variants of the same species of moth rebounded, as the darker moths became easier for birds to spot and to eat.

Reigler’s work is based on a local analog: the black mold called Baudoinia compniacensis, or whiskey fungus.

Baudoinia occurs naturally, and somewhat lethargically, but becomes super-energized when in contact with ethanol fumes, such as those released by distilling. In the vicinity of distilleries, it is known to coat everything from trees and fence posts to buildings and cars.

Reigler’s research centers on several species of polymorphic moths native to the region, and addresses the question of whether the frequency of lighter moth forms relative to darker forms changes in relation to the color of tree trunks due to the proximity of those trees to the warehouses where whiskey is being aged.

The field research is being conducted in the woods surrounding the Castle & Key distillery in Millville, Ky., near Frankfort. Under its former name, Old Taylor, the distillery began operation in 1887, and bourbon has been aged in warehouses in the area for decades, according to Heldt-Davis. The woods in the vicinity are coated with fungus and moths are plentiful. It’s the perfect spot for field work to document evolution in action. 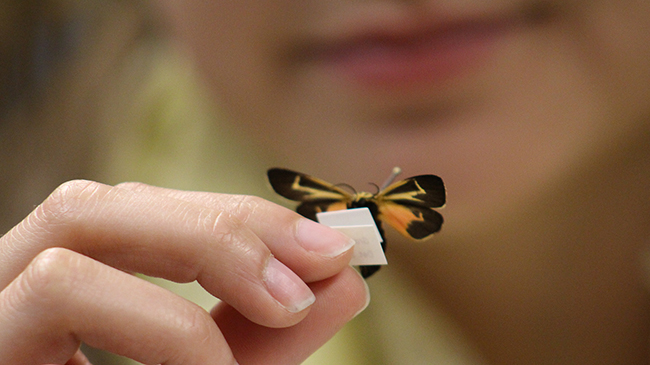 Tools of the trade

Heldt-Davis can also pinpoint the day she became part of this ongoing research story.

“I plopped myself in a chair in Prof. Reigler’s office and said, ‘I want to do research with you. What can we do?’”

Reigler took her on as research assistant, and introduced her to an area of biology—entomology—that Heldt-Davis had not systematically explored.

Over the course of the past year, aided by the student research fellowship, she has acquired fundamental skills unique to entomology, such as collecting, identifying, categorizing and pinning the insects, particularly moths.

“It’s peaceful,” she said, of the categorizing, which brings her into contact with decades of professionally archived specimens. “You’re working meticulously, taking your time, looking at the work of others, and coming to appreciate how much time they took to do this.”

According to Reigler, she has taken it upon herself to delve more deeply into the holdings at IU Southeast and identify moths that had been labeled but not yet been categorized. She successfully identified the species to which many belonged and moved them to their proper trays in the collection. This was truly “above and beyond.”

One of her final tasks for Reigler will be to prepare a spreadsheet listing all of the moths collected this spring – including species name, number of individuals, collection location – to the administrator of the Kentucky Lepidoptera Database.

“These records help track the distribution of butterfly and moth species in the state,” Reigler said.

At this level, there is much more at stake than in ordinary coursework, Heldt-Davis said. This is research that will ultimately be peer reviewed and published.

“If there are no dark moths in the populations living near warehouses, how truly widespread is the staining? These species tend to travel no more than q quarter mile radius from where they feed as caterpillars,” Reigler said.

This larger importance has compelled Heldt-Davis to step up her game in several areas, including species identification and the organization of data.

In the field, she has gained experience in collecting, which requires not only a knowledge of the collected species ecology and behavior, but great sensitivity to light, weather conditions, the proximity of predators, time of day, ambient humidity and other factors. 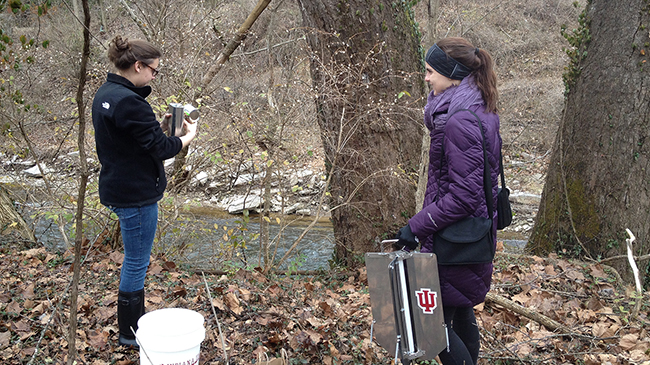 Heldt-Davis has been part of the Honors Program since arriving at IU Southeast, and credits the program with helping to improve her communication skills.

“When I first came here, I didn’t have much confidence in my writing or public speaking ability,” she said. “The Honors Program boosted me through constructive criticism that made me a better writer and speaker.”

That boost has pushed Heldt-Davis forward in biology, not normally a discipline one associates with writing, yet one that in fact relies heavily on it.

“You have to be able to efficiently explain your data to people who might not fully understand what you’re doing,” she said. “If you’re not explaining it clearly, there is no way for colleagues to duplicate your work or check your results.”

In applying for the student research fellowship, Heldt-Davis discovered another benefit to improved writing skills: access to funding through a cogent proposal.

Engagement with the natural world

Heldt-Davis initially considered larger institutions, but made the move to IU Southeast due to the accessibility of faculty and opportunity to conduct research as an undergraduate.

“Doing any kind of research is great if you want to go to graduate schools, especially in the sciences,” she said.

Reigler noted that Heldt-Davis had solid data collection and analysis experience from classes, including field biology, but learned identification and curatorial skills on the research project that are crucial to advancing in the field.

“Morgan shows great tenacity and patience, both essential to lab work,” Reigler said. “I love to see her enthusiasm for the research, and a genuine interest in its outcome, plus a real engagement with the natural world.”

For her part, Heldt-Davis admires the way that Reigler has managed to combine diverse loves and interests—“writing and insects and bourbon and science”—in a way that she would like to emulate, through her passion for lab science and field work, especially wildlife conservation.

This summer, she will work with birds of prey at Dwight R. Chamberlain Raptor Rehabilitation Center at Hardy Lake, Ind. She will care for both the permanent education birds and birds brought in for rehabilitation, aiding in basic upkeep like feeding as well as providing medical attention.

Looking back over her academic life thus far, she sees and values the continuity amid the variation. She even remembers her first two big words.