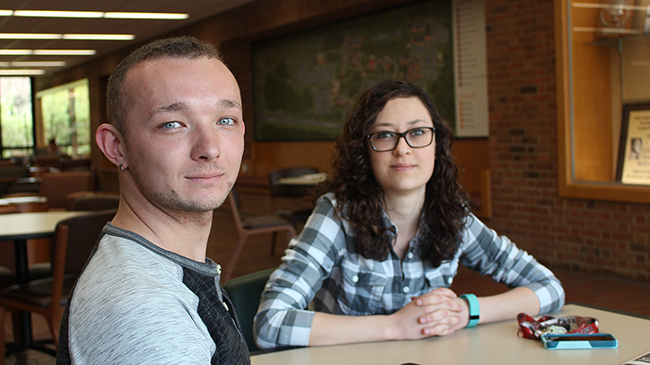 Christian French and Kirsten Black blend psychology and criminal justice in their approach to human trafficking.

At that age, some of the people they study have already become victims of human trafficking.

Black and French, under the supervision of Dr. Sara Walsh, assistant professor of criminology and criminal justice, have spent the past year examining several aspects of the hidden and harrowing world of modern slavery, focusing on sex trafficking and exploited Korean immigrants in the Kentuckiana region. Their research goals: to create awareness locally, pioneer a multidisciplinary approach to the issue and contribute to the solution of a burgeoning social ill.

The relevance and immediacy of their study area were underscored by the first Southern Indiana Human Trafficking Awareness Conference, which was held at and co-sponsored by IU Southeast on April 1, and brought victims’ organizations, citizen groups, law enforcement and state officials together in order to place this issue front and center in the public discourse in our region. Indiana Attorney General Greg Zoeller, who has made the issue a priority of his office, attended and addressed the conference.

According to Black and French, trafficking is endemic in the world today, and Kentuckiana is not immune. Despite bucolic surroundings, the region is used by several networks shuttling people between Nashville, Tenn. and Chicago, Ill. in addition to being home to at least four of its own trafficking operations. According to their research, major sporting events, such as those held in Louisville, are also lucrative for traffickers, and draw many to the area.

These people may be engaged in prostitution or other illegal enterprise, but may also work in restaurants, hotels, nail salons and other legitimate businesses, essentially hiding in plain sight, as one law enforcement official who spoke with Black and French has put it. 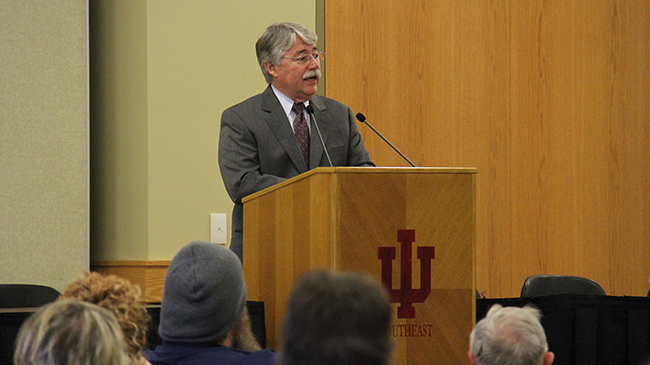 Indiana Attorney General Greg Zoeller has made the fight against human trafficking a priority of his office. Here, he addresses the Southern Indiana Human Trafficking Awareness Conference at IU Southeast.

For Black and French, focusing on the issue of human trafficking is a natural outgrowth of their interests, both academic and personal, and their drive for social justice. They chose the topic themselves, and developed a working approach that blended the methodologies of their respective fields.

Black is a criminology and criminal justice major minoring in psychology, with a strong commitment to victims’ advocacy. She is a volunteer with the Southern Indiana Human Trafficking Task Force, a new organization that seeks to educate the community on trafficking, support law enforcement and medical professionals, identify services for victims and build curricula for educators. As intern, Black helped to organize the conference, participated in workshops to familiarize law enforcement with trafficking issues, built an internal resource guide and much more.

French is a psychology major who is keen to bring insights from that field into areas of law enforcement and policy where a more sensitive and informed approach to human beings and their situations might improve their chances of getting the help they need. He is currently a “homemaker” at Associates in Counseling and Therapy, a practice in New Albany, Ind., where he supervises visits between parents and children who were taken from them. He works closely with the Department of Child Services, therapists, case managers and other service providers.

The two see their work as a first step in identifying gaps in knowledge about trafficking in the region, and a way for the academic community to leverage its expertise.

Their view is shared by Yvonne Moore, director of the Task Force.

“Academic stakeholders can be an instrumental part of eradicating human trafficking by conducting research and assisting with educating and empowering students to become more involved in this issue,” Moore said.

One of the key challenges of the work has been informational, Black and French said. It’s hard to get an accurate picture of the scope of trafficking as its secretive nature renders it nearly impossible to quantify, and social nuances create obstacles to full exposure. For example, over time, it is not uncommon for victims to exhibit what psychologists call “Stockholm syndrome,” the tendency of victims to become loyal to and protect their abusers. In addition, traffickers frequently use drug dependency to bind victims to them, and to instill a fear of law enforcement. Victims are led to believe they would be worse off going to the police than remaining in slavery.

This factually untrue – law enforcement is more interested in “bigger fish,” French said – but also shows that there is a need to think more deeply and reform the entire system for bringing people out of slavery.

“Often times in the past, trafficking victims were not recognized as victims, but rather treated as criminals—as willful participants in prostitution,” said Jennifer Thuma, victim advocacy programs director in the Indiana State Office of the Attorney General. “Still today we continue to work to change perceptions of child victims especially, who often are labeled as ‘child prostitutes’ when no such thing exists. Children are always victims and must be treated as such, and all victims truly need trauma based services.”

Disconnects like this reinforce the need for a multidisciplinary mind-set in identifying and communicating with and about victims, according to Black and French.

Given the difficulty of quantitative analysis, they took a qualitative approach to their subject that began with understanding the behavior of victims from a social and psychological perspective. Through interviews with both law enforcement and the director of a shelter for victims, they moved through uncharted terrain, adjusting their research parameters many times along the way, in keeping with the patchy and troubling nature of the information they received.

“Undertaking a project of this nature requires great ethical maturity and an awareness that the protection of subjects is both nuanced and more important than a researcher’s desire for data,” Walsh said. “Kirsten and Christian take all of these issues seriously and continued to put their research subject’s well-being ahead of their own needs, even when it meant reworking their approach and methodology.”

Their research took into consideration not only the hard facts of criminal activity in the Louisville Metro area, such as prostitution, drug abuse and pedophilia, but psycho-social factors such as the impact of Asian ideals of honor and loyalty to the collective, to arrive at a picture that was at odds with several prevailing views about who the victims are, how long they remain in slavery, and what psychological mechanisms are at work in keeping them there.

These are the kinds of insights that could help to support the emerging consensus on how to deal with trafficking.

They will also disseminate it to agencies and organizations working in the field, a goal from the very beginning.

“We felt it would benefit us as students and future professionals to work on something that is interesting but also beneficial on a societal level,” French said.

By taking a multidisciplinary approach, Black and French are helping to build bridges to other stakeholders, and to involve the public in an issue that affects quality of life for everyone.

“Trafficking is a lot more common than people think,” French said. “If you’re contributing money to these places, you’re making them stronger.”