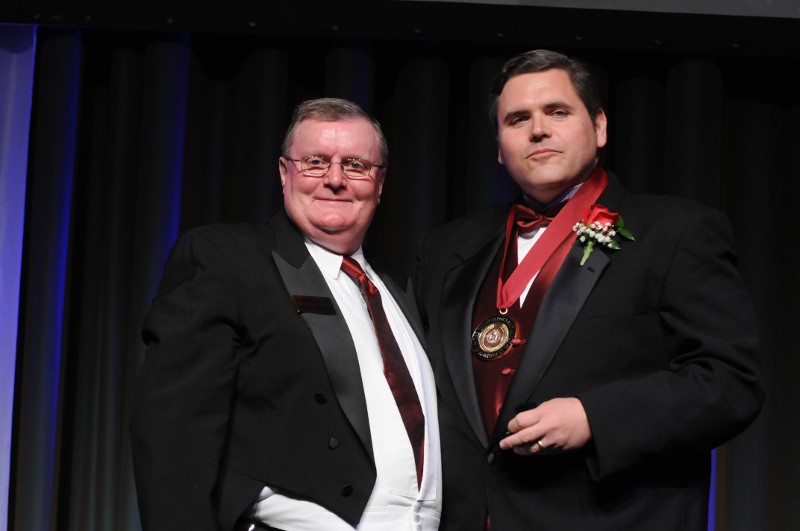 Clere, an IU Southeast alumnus, is serving his fourth term in the Indiana House of Representatives, having been first elected in 2008. Clere is also a legislative member of the board of Indiana’s CHOICE program, a state-funded program that helps seniors and people with disabilities stay in their home and avoid institutional care.

“Ed has continued to be an active and involved alumnus at IU Southeast,” Chancellor Ray Wallace said. “Not only does he represent the city of New Albany, but he also co-authored the resolution recognizing IU Southeast’s 75th anniversary. Ed takes the time to speak to political sciences classes on our campus and has invited students to the statehouse to experience the legislative process first-hand.”

Clere attended this year’s Medallion dinner with his wife, Amy, and their children. In his remarks, Clere highlighted the Indiana Statehouse resolution and the fixture IU Southeast continues to be for southern Indiana and the greater Louisville area.

“I am so humbled to receive this honor,” Clere said. “It was a special moment earlier this year when I had a chance to offer a resolution on the House floor honoring IU Southeast on its 75th anniversary. It was a time to look back, reflect and talk about IU Southeast’s legacy and also its future. IU Southeast is a special place for the students, faculty and others who work and learn on campus, and it’s also a special place for our broader community.”

The Chancellor’s Medallion is the highest honor presented by the chancellor of IU Southeast. To date, 43 of these awards have been presented since 1994. Each recipient has contributed to the economic, educational and general welfare of southern Indiana.

In addition to Clere, IU Trustee Pat Shoulders was also presented with the Chancellor’s Medallion at the 2016 event. Hundreds of Southern Indiana’s and greater Louisville’s top business, civic and educational leaders attended this year’s Medallion Dinner to honor these two distinguished community members.