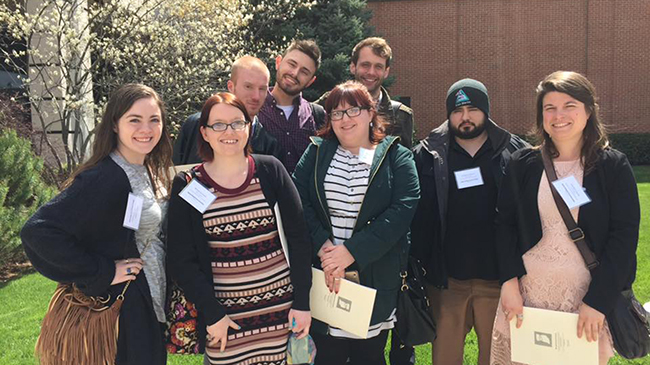 All work was published in IU Southeast’s student news outlet, The Horizon. Awards were in categories recognizing superior work in writing, design, photography, and online journalism, and students won more than twice as many awards as The Horizon had won at the 2015 convention.

“I am so proud of my students and the work they’ve done to receive such recognition,” said Adam Maksl, assistant professor of journalism and faculty adviser to The Horizon. “These awards are great external validation for the kind of serious journalism that students work so hard to produce.”

Among the work recognized were major in-depth stories on homelessness among IUS students and what the university is doing to address sexual assault. Additionally, students were recognized for design, multimedia, and social media work, which Maksl said helps show the impact of recent changes in the journalism program as it has transitioned to focus more on cross-platform digital storytelling.

“Many of our classes and the journalism program in general focus significantly on digital storytelling and using multimedia tools, so seeing students win awards that relate to that work is very exciting,” Maksl said.

For example, Maksl said, The Horizon staff won an award for Best Facebook Page, with a judge saying that the page “does what social media should do – be social.” Maksl said the extra effort students put into cultivating The Horizon’s social media this year came in part as a result of what students learned in the program’s Social Media Strategies class.

Paige Thompson, a senior journalism major and co-editor-in-chief of The Horizon, won third place for in-depth reporting and was part of a team that won third place for a breaking news story. Thompson, who before she has even graduated has been hired in the newsroom at WDRB in Louisville, said she is proud of the professional-level work she and her fellow Horizon journalists have produced.

“I was beyond proud and honored hearing the awards being announced, seeing my friends get recognized for their hard work,” Thompson said. “The Horizon has given me experience that I wouldn’t have been able to get anywhere else. I’ve gained knowledge, friendships and skills that I’ll be able to put to good use in my career.”

In addition to the awards ceremony, the annual convention included breakout sessions and an election of officers. Maksl was elected to be the new executive director of the Indiana Collegiate Press Association, and two of his students, junior journalism majors Joseph Kauffman and Katie Casper, were elected to the ICPA board as president and vice president for small newspapers, respectively.

The Horizon is a multi-platform student-run news organization that serves as an experiential learning lab for journalism majors at IU Southeast. Non-journalism majors also often volunteer for the staff. Students on The Horizon learn and apply skills in information analysis, effective storytelling, and principles of digital media.

The IU Southeast Journalism Program congratulates all award winners listed below for their work:

For more information on the awards and the journalism program at IU Southeast, contact Adam Maksl at amaksl@ius.edu or 812-941-2892.