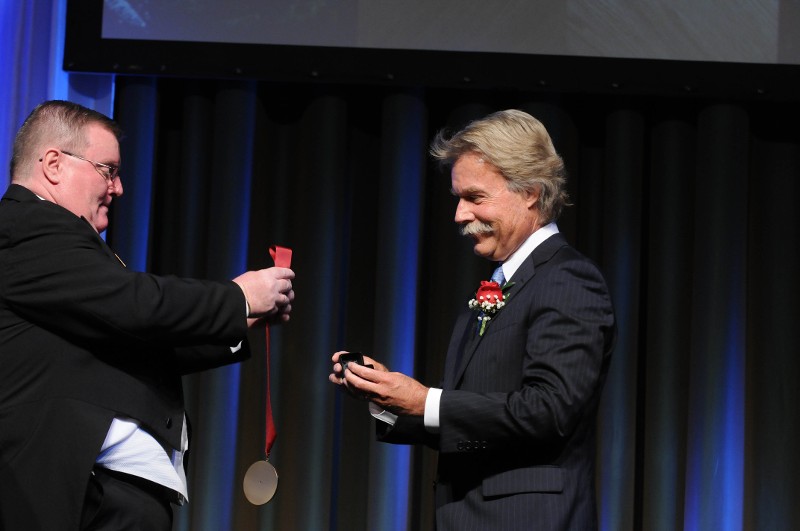 “Pat’s contributions to this university have been immeasurable,” Chancellor Ray Wallace said. “He was instrumental in bringing five fully-furnished lodge-style residence halls to IU Southeast, and he was there the day we broke ground to build them. Pat has been a longtime friend and advocate of IU Southeast, and we are honored to count him among our Medallion recipients.”

Shoulders attended this year’s Medallion dinner with his wife, Lisa. In his remarks, Shoulders highlighted his work with IU Southeast leadership to bring housing to the campus and his vision of the school’s “bright, bright future.”

“I am humbled and honored to receive the Chancellor’s Medallion,” he said. “Over my years as a Trustee, I’ve been proud to work with the people here in making this campus the true jewel in our system.”

The Chancellor’s Medallion is the highest honor presented by the chancellor of IU Southeast. To date, 43 of these awards have been presented since 1994. Each recipient has contributed to the economic, educational and general welfare of southern Indiana.

In addition to Shoulders, Ed Clere, an alumnus of IU Southeast and an Indiana state representative was also presented with the Chancellor’s Medallion at the 2016 event. Hundreds of Southern Indiana’s and greater Louisville’s top business, civic and educational leaders attended this year’s Medallion Dinner to honor these two distinguished community members.

Hear what IU President Michael A. McRobbie and community leaders Ed Jerdonek and Ned Pfau had to say about Shoulders: