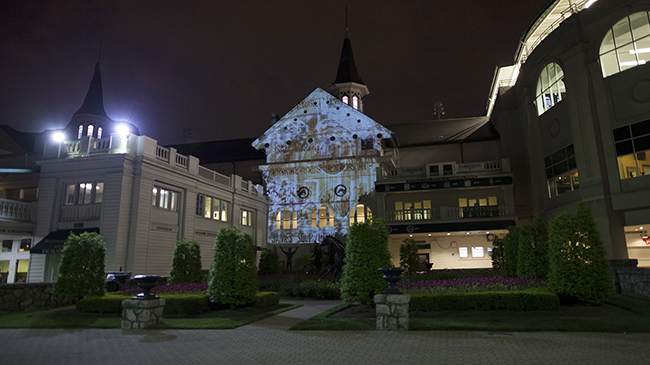 “A Running Loop” by Tiffany Carbonneau and Susanna Crum will illuminate part of the original grandstand at Churchill Downs.

The collaborative artwork, “A Running Loop,” will illuminate a facade of the original Churchill Downs grandstand in the famed paddock area. It celebrates the legacy of African American jockeys, while drawing attention to their eventual exclusion from the sport and also contributing to a new consciousness of Louisville’s past and present.

According to the artists, from 1875 to 1902, 12 African American jockeys won 16 Kentucky Derbies, becoming some of the first great American athletes. The architectural video projection uses faces and names of the jockeys, along with historical footage that highlights the divisions between labor and spectatorship that presaged their subsequent decline. 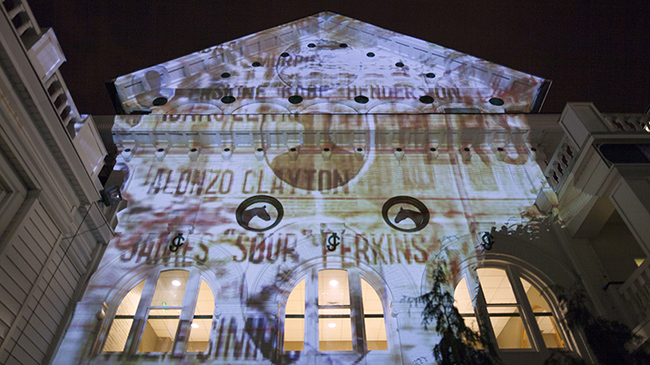 “A Running Loop” celebrates the legacy of African American jockeys.

The artwork blends the talents of its collaborators in a high-profile context that also speaks to their social concerns.

Carbonneau, assistant professor of art and head of the digital art and interactive media program, is known for leading-edge architectural video projections in widely varied public environments nationally and internationally. Much of her work aims to reveal the underlying systems supporting the international economy, making the global local, and vice versa.

Crum, assistant professor of art and head of the printmaking department, investigates lesser-known histories of public spaces through installations, video, sound and works on paper. A Louisville native, she seeks to bring the past into the present, exposing the mentalities and mechanisms that contribute to contemporary realities in her city, such as racial segregation.

The collaboration grew out of Carbonneau’s conversations with 1619 Flux, a new nonprofit gallery and project space that seeks to bring artists together and serves as an incubator for discussing and resolving social justice issues, according to Crum.

The projection allowed Crum to work with her accustomed media such as legislation, maps and infrastructure in a completely new way, and challenged her to up her creative game in the large-scale digital format.

While most of Crum’s art is destined for galleries or museums, the “Running Loop” collaboration has enabled her to co-create a work that brings the message to the actual site it is commenting on, making for a more profound experience of both art and place.

“Presenting work as an architectural video projection physically embeds imagery within the site, and can serve as a rich and complex foundation for an entirely new experience of a familiar place to occur,” Crum said.

That new experience can serve not only to shine a light on a forgotten part of the past, or help to give a new meaning to a locality, but may also spur a public conversation on the present, and point the way towards a new consensus on the shape of the future.

“Our artwork seeks and works to create opportunities for viewers to access public spaces and architecture in a new way—to make the familiar unfamiliar, so that viewers can ask deeper questions about normalized ideas, structures or histories within a specific sociopolitical context,” Crum said.

“A Running Loop” will be on display from 8:30–11 p.m. on Saturday, April 30 in the paddock area of Churchill Downs. Opening Night at Churchill Downs is an event supported in partnership with the Fund for the Arts. General admission is $10.