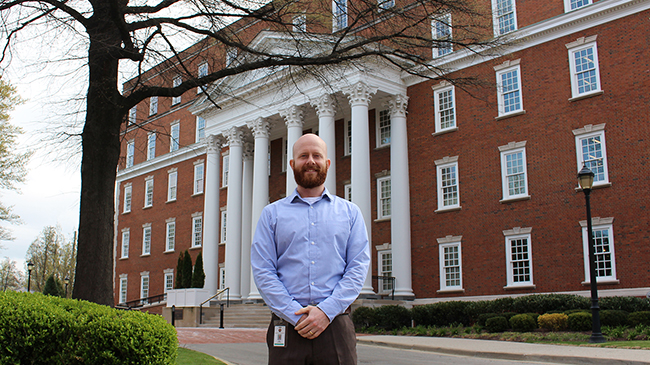 (NEW ALBANY, Ind.)—Benjamin Stewart, a senior business major with a concentration in accounting, is currently interning in the internal audit department of Louisville, Ky.-based Brown-Forman, a global leader in the beverage industry and a pillar of the regional economy.

For Stewart, the internship provides an immersion in the real world of corporate accounting, gaining skills while proving himself in an industry-leading organization.

The internship marks an important milestone for Stewart, a nontraditional student, husband and father, and U.S. Navy veteran.

A native of Jeffersonville, Ind., Stewart joined the Navy out of high school and served two tours of duty in Japan, the Philippines, Qatar and Djibouti. Inspired to apply to college by a fellow serviceman, he followed a scientific interest and was accepted to pharmacy school at the University of Kentucky. After a year of balancing the rigorous program with the responsibilities of parenthood, he changed direction and returned to Southern Indiana, where he began taking courses in the School of Business at IU Southeast. He narrowed his focus to accounting in fall, 2014.

Stewart found the auditing internship posted online by the Career Development Center (CDC). He had taken advantage of previous internships through the CDC, notably at UTC Aerospace, and had benefited from resume proofing and interview coaching during the CDC’s fall event. He submitted a resume to Brown-Forman, then followed up. Danielle Leffler, CDC director and internship coordinator, put Ben in touch with Angela Vairo, manager in reserve power at Brown-Forman, and continued to provide information about this and other opportunities.

Internships like Stewart’s involve a good deal of behind-the-scenes work on the part of Leffler and her team in the CDC. The team is constantly building relationships with area employers. They meet in person and speak over the phone, conduct site visits and bring employers to campus to meet faculty in order that they may learn more about academic and professional programs and processes at IU Southeast.

“We are constantly asking questions and seeking the newest information to share with our students,” Leffler said.

At the cutting edge

Brown-Forman is as much a part of Louisville as Derby and college hoops. In continuous operation since its founding in 1870, the firm is an innovative industry leader and highly regarded community partner, with numerous accolades for corporate social responsibility. The company received a climate leadership award from the U.S. Environmental Protection Agency (EPA) in 2015, and this year was named to the “A-List” of the Corporate Equality Index by the Human Rights Campaign Foundation and ranked one of the best places to work for LGBT equality.

The internship program has been in place for many years, and has grown substantially over the past decade, in areas ranging from accounting and finance to IT, marketing and supply chain.

“We try to ensure that the interns get a valuable work experience while they are with us,” said Vairo. “We want them to get involved in projects, work on teams, collaborate with others and get a real work experience that they can take back to the classroom and/or use to build their resume.”

That experience can pay off. The company’s current CEO began as an intern.

Vairo described Brown-Forman as a collegial company where employees depend on one another to be successful.

“When we bring in interns, we want them to feel included and part of the team.”

Stewart agreed that interns are not given “busy work,” but are involved in vital ongoing projects. He works the same hours (8:30 a.m. to 4:30 p.m.) as regular employees and feels fully integrated into the workflow, with a real role and real responsibilities in a critical company component.

As an internal audit intern, he assists external partner PricewaterhouseCoopers in performing tests on Brown-Forman’s financial data to provide accurate quarterly reports to current and potential investors. The auditing process thus plays a key role in corporate transparency and accountability. Like many other firms, Brown-Forman keeps part of the process in-house to reduce costs, which is where Stewart’s team comes in.

Another key part of his brief is internal control testing across the company’s key processes to ensure compliance with the Sarbanes-Oxley Act, and detailed testing for compliance and market audits.

He also performs ad hoc duties that might emerge, such as working with a more senior auditing associate to complete his first audit of the Brown-Forman Employee Credit Union. in addition to preparing an audit of distributors of Brown-Forman products, travel and expense testing and initial audit research to support site visits performed by a senior associate.

“My work so far has been frequent and varied, which is just what I was looking for in my profession,” Stewart said. “There is literally never a day without something new.”

In keeping with the company’s community focus, Ben is also gaining an appreciation for Brown-Forman’s culture of engagement. After only two months on the job, he has been invited to join employee groups for veterans and young professionals that foster awareness, morale and company spirit through events and other internal marketing. He will also spend a day volunteering with one of the company’s community partners.

Hagan praised Stewart’s attitude, commitment to high quality work, interest in feedback and eagerness to learn about the company and auditing in general. By the end of the internship, he will have not only been exposed to core aspects of his field in real-life situations, but also gained insight into company procedures and protocol.

“Ben will gain experience in the planning and execution of audit procedures, completing fieldwork and testing, as well as an understanding of the department’s role within Brown-Forman’s operations,” Hagan said.

During the internship, Stewart has learned that technical skills such as SAP, Microsoft Office and accounting principles learned in the classroom are essential, but that there are more intangible aspects to becoming a complete professional that only working in the field can provide.

“These [abilities] are all valuable in the internal audit department, but persistence and a good attitude are the attributes that will carry you forward when you’re still honing your technical skills.”