When the curtain rises on “Guys and Dolls” in the Robinson Theater at the Ogle Center this week, audiences will be treated to one of the most ambitious productions ever mounted by the IU Southeast theatre program.

Twenty-five students will sing, dance, bet, pray, brawl and woo their way through the kaleidoscope of penny-ante hustlers, brassy dames and pinstriped heavies that made “Guys and Dolls” an instant Broadway classic when it premiered in 1950. Another ten or so will conjure that vanished world in lighting, scenery and sound.

Tackling a Tony-Award winning musical legend is the latest evidence that the IU Southeast theatre program is thriving, and willing to challenge itself to be even better.

“Guys and Dolls” is a vibrant and sometimes madcap love story set in the New York City underworld of the day. Written by Jo Swerling and Abe Burrows, with music and lyrics by Frank Loesser, the play is based on the stories of legendary newspaperman and writer, Damon Runyon. It follows the antics of Nathan and Sky, a pair of two-bit gamblers, as they find true love and contentment–despite themselves—in the arms of Sarah and Adelaide. The dialogue crackles with wise-guy snark and snappy street slang, a treat for actors and audiences alike.

Every production is unique, with its own joys, frustrations and rewards. This show has been a logistical challenge from the outset, according to Jim Hesselman, professor of theatre arts. Moving the annual musical from fall to spring plopped it into the midst of conferences, travel obligations and spring break, making rehearsals a matter of “hurry up and wait.” Add to this the fact that Hesselman was performing in a production of “Into The Woods” at the Derby Dinner Playhouse in Clarksville, Ind., while choreographer and adjunct lecturer Barbara Cullen was up to her eyeballs in the Kentucky Opera production of “Showboat,” and you have the makings of the kind of perfect storm that drives theatre folk to do their very best.

And in fact, the urgency has brought the students together in a common purpose, as it generally does. Weeknight rehearsals have been focused and energetic, while Hesselman and the faculty directorial team has made the most of its concentrated time together. This is life in the theatre. 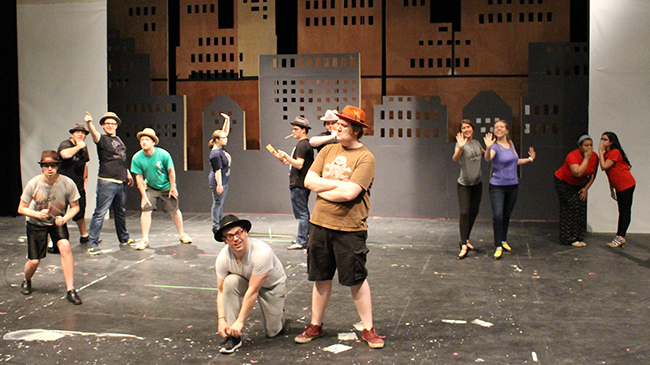 When Rebekkah Meixner-Hanks, associate professor of theatre, was hired in 2006, she was the theatre faculty. She brought aboard Hesselman and doubled the size of the department overnight.

“We had faculty meetings in the hallway,” said Hesselman, assistant professor of theatre.

Since that time, the department has grown to three full-time faculty with up to eight adjuncts, while enrollment has risen from 12 to 65 majors.

What makes the program unique, in the eyes of Hesselman and Meixner, is that IU Southeast theatre majors get to experience the full range of genres over the course of their four years. This challenges them to extend themselves creatively and enables them to build a broad portfolio.

The program also makes sure that students pay their dues outside the spotlight in other areas of stagecraft, such as lighting and scenery.

“We have a different mindset, as working professionals with a solid handle on what the professional industry is doing,” said Meixner. “We teach all the intellectual aspects, but also what is being done now, and what it takes to get a job and make a career in theatre.”

That preparation pays off in tangible and intangible ways. It builds resilience and flexibility, gives students a real collaborative problem-solver mentality, and also challenges them to take charge of their own career journey, be it in theatre or another walk of life. 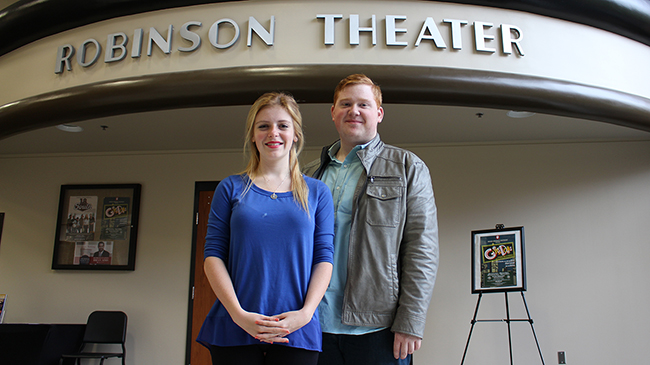 For Hesselman, the IU Southeast program is an inclusive gateway that combines the openness of community theatre with the dedication of a professional company. “Guys and Dolls” is a good example, bringing together students with a laser-focus on acting—even some professional experience—with absolute beginners. It’s a dynamic and ultimately useful mix.

“It’s wonderful because they all learn from each other,” Hesselman said. “Even the very talented and experienced still have to have the ability to learn, and this is one big group project.”

For example, Tim Stucky of Borden, Ind., is a senior double-major in theatre business and theatre with a minor in writing who has some professional stage experience. He plays the role of Nathan, whom he describes as a “lovable weasel.” He sees his future in teaching theatre, and already has his foot in the door at Derby Dinner Playhouse, aided by DDP veteran Hesselman.

Meanwhile, Sarah Inman, a freshman theatre major from Jeffersonville, Ind., is appearing in her first lead role as Adelaide, whom she describes as “a bombshell.” For Inman, the role of the extroverted, worldly Adelaide – at odds with her own temperament –was a challenge. But between Cullen’s experience in the role, and Hesselman’s ability to give her the freedom to put her own stamp on it, Inman has evolved her own interpretation of the character.

For senior Dale Thixton of Salem, Ind., the play marks a more personal landmark. In 2011, just after high school graduation, he was diagnosed with a brain aneurysm over four times the size normally considered fatal. After emergency surgery in Louisville, he was flown to Stony Brook University School of Medicine in Long Island, N.Y. for a procedure to implant a revolutionary stent device to shrink the bulging neural artery. Several follow-up surgeries later, Thixton is in his very first play, in the role of Liver-Lips Louie.

Thixton sees the production as a chance to raise aneurysm awareness and to reflect more personally on how far he has come.

“I shouldn’t even be alive,” he said.

Now he is on track to graduate this spring, with a record of dedication (perfect attendance since pre-school) and dreams of heading to Hollywood to break into movies.

The world’s a stage

Kentuckiana may be the nation’s #1 market for college basketball, but theatre is not far behind. Area high schools such as Silver Creek and New Albany boast renowned theatre programs, and budding actors and technicians have several college options in the region. What sets IU Southeast apart, intentionally, is its unique mix of personal attention, varied repertoire and real-world focus, according to Hesselman.

Personal attention means listening to student aspirations, taking them to gatherings like the Southeast Theatre Conference and being available for career coaching. A broad repertoire means daring students to burst through limitations and discover new layers of potential, and helps them build a rounded portfolio. The real world comes into play well before graduation, in courses that stress time management, booking and portfolio presentation, but also in the way Hesselman, Meixner-Hanks and Cullen bring their own experience to school, day in and day out.

Inman, who once thought of going straight into acting from high school, has discovered unexpected benefits of the theatre program.

“Theatre is relevant for real life,” she said. “You set a goal, work towards it, collaborate with other people, master skills like public speaking and eye contact during a meeting – all that comes with theatre.”

Acting is still her goal, but she has come to value gaining skills to be effective on the larger stage of life.

“I may have come here by accident, but now I wouldn’t go anywhere else,” she said. “I want the degree. I want to be the best.”