(NEW ALBANY, Ind.)—Kindergarteners Lily Soseno and Toshiya Nakamura have no idea that by spending their Saturdays on the campus of IU Southeast, they are helping to strengthen the economy in Southern Indiana.

The two children are enrolled in the Greater Louisville Japanese Language School, known more informally as Japanese Saturday School, which has been held at IU Southeast since 1988.

The Japanese Saturday School provides members of the Japanese community in Louisville and Southern Indiana with a way to further the education of their children in their native language.

At the same time, the participants are cementing bonds between their employers, IU Southeast and the local community, providing benefits that go far beyond schooling. 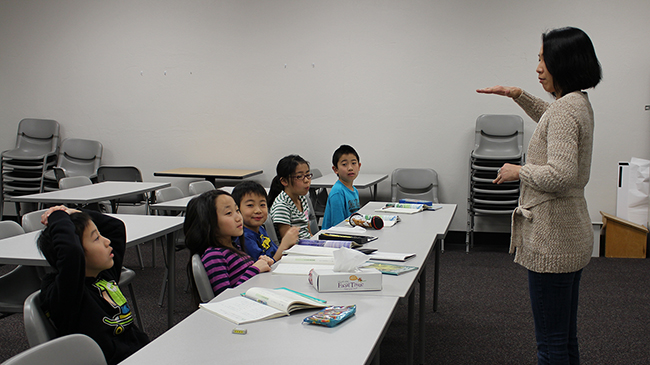 An elementary class at the Japanese Saturday School.

The Japanese Saturday School is overseen by the Japan Center, whose office is in Knobview Hall. The Center coordinates the school among other activities, including fundraising and cultural awareness.

The students, children of Japanese families currently ranging in grade from kindergarten through ninth grade, come for 40 Saturdays per year for instruction in language, mathematics, social studies and, for kindergarteners, music and art. In the warmer months, there are outdoor activities, games and free play. The School also brings Japanese culture to the fore at events in Louisville and Southern Indiana, such as the traditional New Year’s banquet, and as opportunities present themselves.

Like other, similar programs around the country, the Japanese Saturday School at IU Southeast is supported partly by the Japanese Government, partly by tuition and partly through relocation subsidies provided by Japanese employers. The purpose is to support the cultural identity and Japanese-style education of its young nationals living abroad, especially those who will be living in a different country – in this case the U.S. – only temporarily.

The typical duration of a family’s stay is between three and five years. This is long enough for a child to become habituated to the American educational system, making re-entry to Japan challenging.

“Kids learn easily but also forget easily, especially when they are speaking English with friends all week at school,” said Shinji Otsubo, board chairperson of the school and vice president of administration at Jeffersonville, Ind.-based Idemitsu Lubricants America Corporation. “The Saturday school is an important opportunity for them to keep learning Japanese.”

This is especially important in view of the unique structure and curriculum of the Japanese education system, with which the Japanese Saturday School is aligned. The curriculum is sent to the school by the Japanese Ministry of Education. While the students attend local schools full-time during the week, they stay focused on their ultimate return to Japan through the Saturday lessons and daily homework assignments, as well as conversation at home.

The school reflects the interconnected global economy and the role of the Kentuckiana region in it.

Japanese companies are well represented locally, chiefly in the automobile manufacturing supply chain but also extending to logistical services and stevedoring at the Port of Indiana-Jeffersonville. Their names might not be household words, but they have a profound effect on the local economy.

“Since the 1980s when the first Japanese companies planted roots here, we’ve witnessed steady growth in the number of Japanese investments, and the number of employees working for these companies has increased substantially,” said Matthew Hall, executive vice president of One Southern Indiana. “Employing more than 1,200 individuals in Clark and Floyd counties alone, Japanese companies today provide numerous opportunities for Hoosier families.”

Managerial personnel from Japan work with local employers at varying levels of the industrial process, providing specialized leadership and services related to their core specialty. Some are here to manage a project, and will return to Japan once the project is completed. Others may have a longer-term appointment, but still plan to return in order to continue their professional development and to resume their lives in their home country. Still others are principals of their own companies who have made a home here, serving the industrial niche they came to address.

Many bring their spouses and children.

Banno himself is president of D.A. Inc., a division of Kojima Auto Technology that supplies plastic clamps, clips and protectors for electric wiring harnesses for Toyota, Honda and other car makers. Its corporate offices and distribution center are located in Charlestown, Ind., where it has been a fixture in the landscape for 27 years. The company employs 17 local workers and last year announced a $10.6 million expansion of its manufacturing operation at the River Ridge Commerce Center that will expand employment to 35. The factory will open in mid-September of this year.

Banno enrolled his two sons in the Saturday School 25 years ago. The family returned to Japan, but Banno came back to Southern Indiana to oversee the expansion of D.A. Inc.. His involvement in the Japan Center has a very personal motivation.

“I feel I must do something in return for the school and the community,” he said. 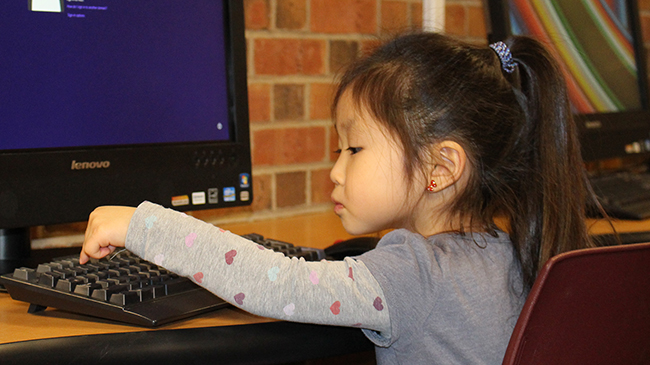 Anchor of the Japanese Community

For the 2015-16 school year, the school boasts 23 children from 15 families. It has a staff of eleven, including nine paid teachers and the rotating volunteer positions of Eiji Hosotani, principal, and Otsubo, board chairperson.

While the children learn, the parents can turn their attention to organizing events, fundraising, or just catching up with one another.

“The Saturday School is now the core base of communication among parents and families, even for those who don’t have children,” Banno said.

Otsubo also sees a value beyond the purely academic for the region’s Japanese population.

“In this area, there are not many Japanese people, and no Japanese clubs or sources of information, so it’s not easy to find Japanese friends,” he said. “Talking in English continuously is a little tough for us. But we can relax when we talk freely in Japanese, so for the parents, the school is also important.”

Flying into the future

At its height, before the recession, the Japanese Saturday School was about twice its current size. As contraction rippled through the auto manufacturing sector here and in Japan, fewer managers were posted abroad, and enrollment dipped. The Japan Center now supplements corporate and government support and tuition with plans for fundraising, and the economy has regained momentum, evidenced by the expansion of local Japanese-owned companies.

The school’s website outlines its vision in poetic terms that underscore its essential role in a community that is even more diverse than when the school was founded..

“Teaching the language of both Japan and the U.S., so that we can fly to the future as an international people with a broad vision . . .”

Ichiko Epperson has been involved with the school for many years, as a parent, teacher and also coordinator of the Japan Center on campus. Like several other volunteers over the years, she is married to an American, and came to the group in order to keep her culture alive for herself and for her children.

“As long as there are students, we will keep on teaching,” she said.