Everyone is driven by something.

Drew Gukeisen is driven by the desire to discover something new to science.

And he has done just that. Gukeisen has identified a virus named OHR.

OHR is a bacteriophage (“phage” for short), a type of virus that invades bacteria, in this case a bacteria known as Caulobacter crescentus which is commonly found in ponds, creeks and rivers. OHR was captured from the Ohio River.

Gukeisen, a senior biology student from Lexington, Ky., received a 2015 IU Southeast student research fellowship to isolate, characterize and sequence the genome of “his” virus. Working one-on-one with Dr. Pam Connerly, associate professor of biology, Gukeisen is performing the kind of basic research that may one day help medical science combat such modern-day plagues as antibiotic resistance. 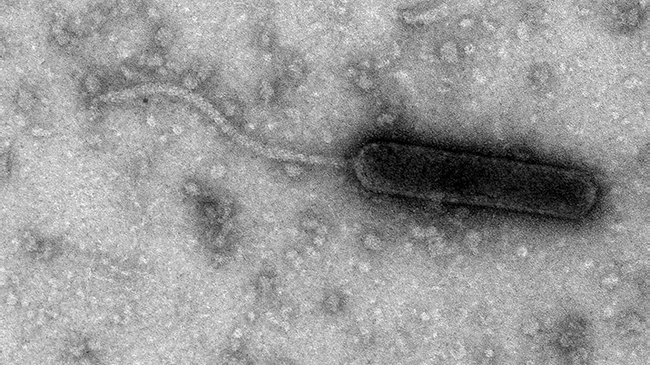 A passion for basic research

Phage research is an resurgent field of study, said Connerly.

“Much of the work that led to the molecular biology revolution, understanding the role of DNA and proteins and how cells make each of them, came about in the mid-1900s due to work on bacteriophages,” she said.

The field has attracted renewed interest because scientists have become aware of how very many phages there are, and because comparing genomes between large numbers of them is now possible, among other reasons, she said.

She has been working in this field since 2005. Coming to IU Southeast, an institution with a strong commitment to undergraduate research, she saw this area as one that could connect existing student capabilities with emerging trends in the scientific community.

It is becoming clear that phages help to move DNA around in the environment, due to their ability to penetrate bacteria and take over their reproductive machinery to make more copies of themselves, before bursting out and spreading, typically destroying the host bacteria in the process.

This ability to destroy bacteria has fostered the practice of phage therapy, most notably in the nation of Georgia, where researchers claim to have used phages to destroy multiple resistant staph (MRSA), a bacteria that is seen as a major challenge to medicine in the coming decades.

Before such approaches can be vetted and approved in the West, scientists need to learn more about phages. That is where research such as Gukeisen’s project comes in.

Gukeisen’s work seeks to expand our understanding of how OHR interacts with its host bacterium, Caulobacter crescentus, and its relatives. This knowledge can help teach us more about phage diversity and genetics.

“Such basic research is essential for building the background and framework from which more applied research is built,” said Connerly. “Scientists working on phage therapy could potentially gain from any increase in understanding of these topics.”

To provide this foundation research, Gukeisen spends long hours in the lab in the Life Sciences building. Through a series of steps including filtering, plating, enrichment, serial dilution and “picking,” he obtains a stock of phages large enough to be used for DNA extraction.

The next steps will be isolating and sequencing the OHR genome. Ultimately OHR will join the thousands of other sequenced phages that are being collected in worldwide databases.

This is what Gukeisen came to IU Southeast to experience: the chance to work directly with faculty on real microbiology and genetic research, on a small campus with easy access to labs.

“I’ve been interested in microbiology since I first looked through a microscope, so doing research leading to DNA and genetic discoveries is very interesting to me,” he said.

But apart from some lab work as a volunteer at the James Graham Brown Cancer Center in Louisville, Gukeisen had no experience in microbiology techniques or methods prior to arriving at IU Southeast. Working with Connerly, he received a grounding in these processes, such as creating bacteria cultures, preparing viral samples, making media and reagents to grow bacteria, and more. Since 2014, he has been given more independence in the lab to perform tasks needed to continue working with the phages, he said. When a new method is introduced, he and Connerly work together to perfect the method.

To deepen, quicken and broaden his research, Gukeisen and Connerly have been able to leverage the capabilities of the IU system: Samples of OHR were taken to the Electron Microscopy Center at IU Bloomington to visualize the shape of the virus, allowing for comparison with other known viruses.

Additional experiments will explore the range of possible host bacteria an individual virus can infect. Gukeisen has already done experiments to show how OHR likely interacts with surfacte structures called pili on C. crescentus, and shown that OHR does not infect three other Caulobacter relatives.

This has potential applications in therapy as certain phages may target only one species of bacteria.

Gukeisen himself is targeting graduate school and medical school. His ultimate goal is a role as a microbiologist or medical officer at the Centers for Disease Control. He credits the research fellowship with contributing to his critical thinking skills and ability to analyze and interpret results, major tools in any field of research but crucial components in microbiology that will help him walk in the footsteps of his heroes.

“I have always thought highly of famous scientists such as Alexander Fleming, Robert Koch and Louis Pasteur, whose discoveries helped shape microbiology and medicine into what it is today,” he said. “I hope that the skills taught to me by this project will help me make a significant contribution to science like they did.”

Gukeisen will present his findings at the 12th annual IU Southeast Student Conference in April, 2016.