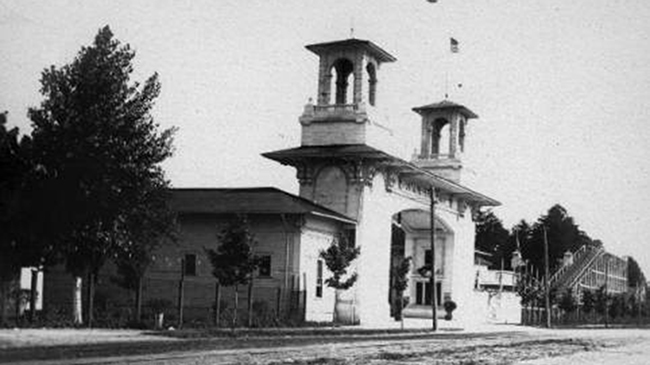 Among many revered Louisville landmarks, Fontaine Ferry Park holds a special place in the local memory and imagination.

Located on over 600 acres along the banks of the Ohio, on the big bend downstream from New Albany, the park included roller coasters, a huge swimming pool, an outdoor dance garden, a roller skating rink and countless arcade attractions. From 1905 to 1969, it was a magnet for young and old, rich and poor, white and . . . white.

The history of the park, the circumstances of its demise and the echoes of segregation in the space it occupied are the subject of “Breaking the Loop (The Loop),” a three-part cyanotype print by Susanna Crum, assistant professor of fine art at IU Southeast. The work is on display through Feb. 19 as part of the exhibition, Memory Palace, Exploring Time, History and Memory at the Manifest Creative Research Gallery in Cincinnati, Ohio. 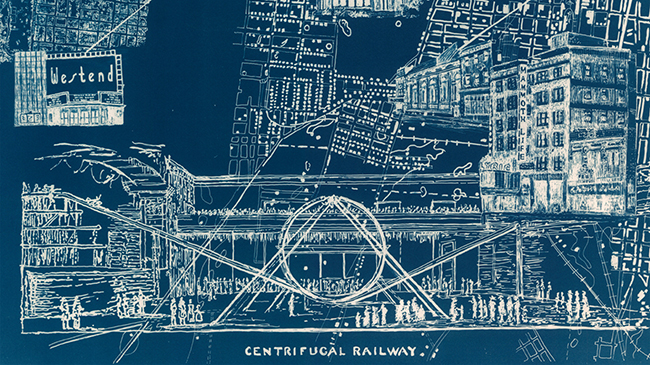 “Breaking the Loop (The Loop),” detail, by Susanna Crum

“Breaking the Loop (The Loop)” is a hand-drawn blueprint triptych that overlays artifacts such as news articles, advertisements and maps with contemporary satellite imagery, all relating to Fontaine Ferry Park.

But it is not a mere collage. It is the story of the park, what it represented to area residents, and how that story echoes in its place. That place is now Shawnee Park, a public space. But individual and even collective memories are private things, and define our experience of space and time.

Or, to paraphrase Crum, “now” is constructed from “then.”

“Shared, public spaces stand at the intersection of past, present and future, and bear witness to a diversity of unique experiences and memories,” Crum said.

In the case of Fontaine Fun Park, Crum sees a microcosm of the history of Louisville in the turbulent 20th century.

For most of its history, Fontaine Ferry Park was off-limits to African Americans. As Louisville’s west end became home to more black residents through the 1950s, and so called “white flight” accelerated, the park remained steadfastly whites-only, and became every bit as much a potent local symbol of racial injustice as the segregated lunch counter that provoked Cassius Clay to fling his Olympic gold medal off the Second Street Bridge.

Fontaine Ferry Park finally welcomed black customers in 1964, and business boomed. But riots following the assassination of Dr. Martin Luther King did not spare the park, and it closed in 1969.

Crum became interested in the Fontaine Ferry Park story while working on an exhibition on cultural sustainability at the Carnegie Center for Art and History in New Albany. She sourced maps, advertisements and also oral histories in the Filson Historical Society archives, the Frazier History Museum, the Kentucky Oral History Commission, the Louie B. Nunn Center for Oral History, the University of Louisville Archives and Records Center, and the Louisville Free Public Library.

Clearly, Crum is a believer in research, and encourages her students to seek out local resources that help them make work they can be passionate about. She hopes her thorough research- and community-based approach to art can model ways for students to take their own projects more seriously, she said. This confidence allows emerging artists to advocate for themselves, which in turn can translate into recognition, access to facilities and support, the foundations of a successful and meaningful career.

For Crum, a Louisville native, the work is both a personal investigation of her city’s history, and a way to impact its future.

The dual purpose is revealed in the title.

“Just as the park’s first roller coaster, the Loop-the-Loop, featured a terrifying arc that encouraged spectators more than active participants, American urban neighborhoods were locked into spirals of decline seen to affect only part of a population,” Crum said. “Understanding the complexity of a place’s past is integral to breaking the loop.”

The power to reveal

For Crum, public places don’t just rise and fall. They are constantly being defined by human decisions, and these may be informed by genius, optimism, inclusivity – or short-sightedness, fear and intolerance.

“Wherever we live, we inherit our home’s social histories. The familiar click-clack of Fontaine Ferry’s wooden roller coaster echoed throughout a neighborhood that was undergoing swift and lasting changes in its social makeup,” Crum said. “Such changes were founded in institutionalized racial separation and strategic concentration of poverty, with methods like real estate ‘blockbusting’ and federally-endorsed redlining.”

In the shattered strata of historical materials that make up Crum’s piece, the viewer experiences the fragmentation of a community. In today’s peaceful Shawnee Park, there is little overt evidence of past turmoil. Yet the policies and practices that created those tensions echo throughout American cities today, said Crum, resulting in social issues she considers it important to address and work to remedy. It is incumbent upon the power of art, Crum says, “to reveal what we’ve forgotten.”

“Art empowers viewers to respond, act and ask questions,” Crum said. “If we can find more ways to see, identify, and speak about the effects racial inequality has on our society, we will be able to seek and implement more effective policies and solutions.”