It’s an epic song of social justice, born in struggle and swaddled in jazz.

Langston Hughes, poet laureate of the Harlem Renaissance, was also on the board of directors of the Newport Jazz Festival when he wrote “Ask Your Mama: 12 Moods for Jazz.” The year was 1960, in the heat of the modern civil rights movement, after Little Rock and Rosa Parks, before Selma and Memphis. Disturbed by violence that had erupted around the genteel festival, Hughes wrote a work that he hoped would serve as a mirror and a beacon — to show where we had been, where we were, and where we needed to go, as a society and a nation.

“Ask Your Mama,” enfolded into the Langston Hughes Project, will be performed by the Los Angeles, Calif.-based Ron McCurdy Quartet at the Paul W. Ogle Cultural and Community Center on Thurs., Feb. 18, 7 p.m. as part of Diversity Week. Prior to the concert, the ensemble will accompany the winners of the IU Southeast Slam Poetry Contest as they read their original poems on stage. These talented IU Southeast students are Mathew Haskell (“Silent Voices”), Kataria Berry (“We’re Living in a Jungle”), Dalton Kirk (Close-minded World”) and Hannah Noble (“The Ships”). 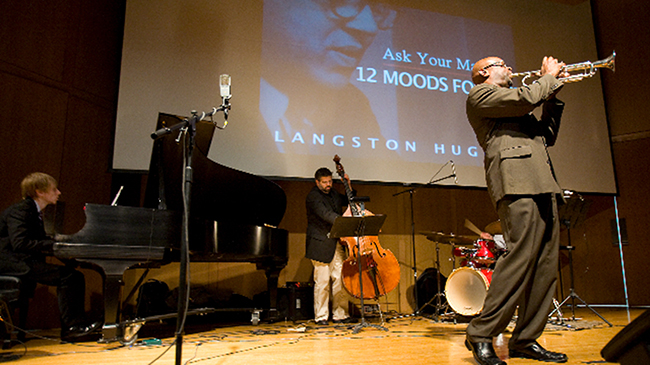 The event arose when trumpet player and educator Dr. Ron McCurdy reached out to Michael Jackman, senior lecturer in English (writing) and Academic Affairs diversity coordinator at IU Southeast. The timing was perfect. Jackman had been considering ways to enhance cultural relevance in teaching when he received the call.

“I saw the Langston Hughes Project as an opportunity for the campus to hit that note,” Jackman said.

A work of stylistic diversity

“Ask Your Mama” is a unique artistic achievement, featuring detailed musical instructions for genres as diverse as gospel, mambo, and German Lieder alongside muscular poetry that thunders, caresses, sways and soars. It was not performed in Hughes’ lifetime (he died in 1967).

McCurdy, a faculty member in the School of Music at the University of Southern California, has revived and enhanced “Ask Your Mama” in numerous appearances with his quartet across the U.S. and abroad. He first performed the work with his own music in 1996 in Minneapolis, Minn. to commemorate the opening of the Weisman Art Museum. Since relocating to Los Angeles, he has written new music for the work, and augmented the staging to include visual elements by African American artists and photographers such as Gordon Parks, Romare Bearden and others, that form a tableau of images linked to the content of the poem.

McCurdy has performed “Ask Your Mama” at colleges across the country, collaborated with the Indianapolis Symphony on an orchestral presentation, and recently returned from a European debut at the Barbican in London, UK, where the text was co-read by rapper Ice T.

According to McCurdy, the piece was intended both to entertain and to educate.

“It really covers a whole swath of our American history, exposing the whole tango dance that we’ve had to address for several hundred years, about how do people of different ethnic backgrounds co-exist,” McCurdy said. “Hughes expresses how that tango dance has taken place, and he also offers things we can do to do it better.”

A stage for student voices

The inclusion of IU Southeast student poetry was suggested by McCurdy and organized by Jackman via a contest.

McCurdy began incorporating the work of student poets two years ago, to make the experience of “Ask Your Mama” more inclusive, he said. Once the poems have been selected McCurdy composes music specific to the identity of each, then works with the poets on aspects of theatrical presentation.

Jackman selected four poems from among a strong field.

“All of the entries show a strong commitment to understanding and expressing the consequences of racism and the struggle for freedom, both socially and personally,” Jackman said. “The four winning entries stood out for fresher, more original language, more specific and deeper understanding, and high performance potential, with strong rhythms and emotional range.”

Among those selected was Mathew Haskell, a junior from Louisville, Ky., for whom the performance will be a first-time experience.

“The performance is an avenue in which my voice can be heard, because I believe I have a strong, intellectual and uplifting message to tell the world,” he said.

Dalton Kirk, a sophomore from New Albany, Ind. also sees his writing as an outlet to connect personal feelings and impressions with the wider readership, to bring out “a bigger message.”

Kataria Berry, a junior from Louisville, Ky. is honored to present her work under the banner of Hughes, and sees her poem as a wake-up call for all ethnicities to fight racial injustice. “I get to be part of my very own modern day history,” she said. “I am Black History.”

For senior Hannah Noble of Leavenworth, Ind., the performance is a chance to share both personal feelings and a larger message.

“Black history month is as important and relevant today as it was 40 years ago,” she said. “As a university, IU Southeast seems to always be striving to be current, relevant, inspiring and diverse. These performances will just help IU Southeast continue these goals.”

Where does the campus go from here?

Jackman would like to see more events added to Diversity Week, and to host a real poetry slam competition, as part of Black History Month, Martin Luther King celebrations and other celebrations of difference.

“I love to give students the chance to have their creative work celebrated in this way and to show what a rich creative community we build when we offer opportunities like this,” he said.

“Ask Your Mama: 12 Moods for Jazz” will be performed at the Paul W. Ogle Cultural and Community Center on Thurs., Feb. 18 at 7 p.m. Joining trumpeter and spoken word artist McCurdy and pianist Brandon Cardoba to round out the quartet for this performance are two Hoosiers: Indiana University alumni Mitch Shiner of Indianapolis, Ind. on drums and Scott Pazera of Lafayette, Ind. on bass. The concert and parking are free and open to the community.