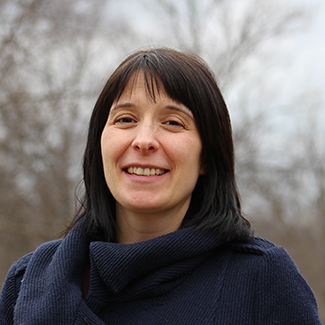 Dr. Meghan Kahn is assistant professor of psychology in the School of Social Sciences at IU Southeast. She joined the faculty in 2009 from Bowling Green State University in Bowling Green, Ohio, where she had already distinguished herself through research and teaching in psychology and neuroscience. At IU Southeast she has developed undergraduate classes in psychology, research methods and statistics, behavioral neuroscience and more, while publishing widely in peer-reviewed journals in her area of concentration, such as the Journal of the Indiana Academy of the Social Sciences and the European Journal of Neuroscience among others. Her current laboratory research focuses on olfactory learning in homing pigeons, with direct relevance to memory impairments in humans, such as Alzheimers. Her work is truly interdisciplinary: she has collaborated with IU Southeast colleague Dr. Lucinda Woodward on research involving survivors of civil war in Liberia, and is involved in trials of the “flipped classroom” at IU Southeast. Her work has been presented at numerous conferences including those of the Midwestern Psychological Society and the Indiana Academy of Sciences. She is currently developing a B.S. program in neuroscience that will also include classes on topics such as neuro-ethics, which will explore the ethical implications of advances in neuroscience. Dr. Kahn most recently received a Campus Commitment Award for Innovation (2015), is active in committee work to enhance student academic and campus life, and is a faculty editor of the annual IU Southeast Undergraduate Research Journal. She spoke with Academic Information Officer Steven Krolak.

How do birds use their sense of smell?

Scientists have known for more than 50 years that pigeons use their sense of smell to return home when displaced to unfamiliar locations, but they have not known what the pigeons are doing with this odor information. In my lab we have shown that pigeons can use odor cues to make choices about where to go in a maze, and that they learn to do this faster when they are given odor cues than when they are given just visual cues. One possible explanation from these observations is that pigeons use odors to “cue up” an internal representation of their world that contains information about where specific events (such as food) occur.

What can the avian hippocampus tell us about the human brain?

The avian hippocampus is quite similar to the human hippocampus in function, connections with other parts of the brain, and in containing neurons with similar electrical response properties. In addition, the sensory inputs to the hippocampus of birds are very similar to that of humans, including the relative dominance of vision over olfaction or the vestibular sense in how both (diurnal) birds and humans encode our worlds. I can do studies with pigeons where I can have a lot of control over what sensory information is available to the pigeons, in a way that is not possible with people. This allows me to better determine how various sensory cues, like odors, are linked to memories and spatial processing.

How does our olfactory mechanism relate to other brain functions, like memory?

Olfactory processing areas in the brain are directly connected to both emotional and memory processing areas, which is not true of the brain areas that process other types of sensory information. This brain connectivity results in odors being extremely effective at prompting the recall of past experiences, particularly those of an emotional nature. Lucinda Woodward and I used this understanding of the nervous system connections to analyze the various types of traumas that survivors of a civil war in Liberia had experienced and we discovered that traumas that were associated with specific odors (such as the smell of burning human flesh) were more invasive for the survivors than traumas that were not linked with particular odors (such as hearing people being shot). From a clinician’s prospective olfactory-related traumas may also be particularly hard for clients to avoid as you cannot just look away from an odor that reminds you of a past traumatic experience.

How might an understanding of olfactory disruption help to address memory impairments in humans?

Although genetic and brain imaging tests are being developed to better identify neurological conditions in humans, it is still very difficult to give accurate diagnoses of many conditions such as Alzheimer’s disease, particularly early in the disease. Some studies have shown a correlation between olfactory disruption and Alzheimer’s diseases, along with some other disorders. Testing a patient for olfactory disruptions is non-invasive and inexpensive. If we can learn more about the relationships between memory impairments associated with diseases such as Alzheimer’s, hippocampal dysfunction, and olfactory problems, we might be able to identify these diseases earlier, thus giving patients and their families more treatment options and more time to plan how to handle the disease progression.

What are some of the most critical emerging questions in neuro-ethics?

As more powerful medications are developed and technology-nervous system interfaces become more of a reality (paralyzed patients using robotic body parts to move), neuroscience is really pushing the boundaries of what it means to be human. The ability of some new neuro-imaging technologies to reflect the thoughts and intentions of others is also a big ethical concern as government agencies are interested in applying these technologies to fight terrorism or in the criminal justice system. Up until now, your thoughts have been private, but that may not always be the case.

How does your research involve and benefit students?

Since much of the day-to-day work involves behavioral training and testing, my research students do not need prior training in research methods or statistics to become involved. Many of my students continue in the lab for several semesters and they learn not only how to handle the pigeons, but also how to ask pigeons what they know, despite the fact that the pigeons cannot tell us about their knowledge. Some students gain so much knowledge that they even design their own studies with pigeons. Working with non-human animals can be very rewarding, but it is not something that everyone feels comfortable with. It requires a good deal of patience, and is not the type of experience that can be effectively simulated. For that reason, graduate programs that include research with non-human animals will often require prospective students to gain some experience as undergraduate students, and that type of experience is very rare at an institution of our size.