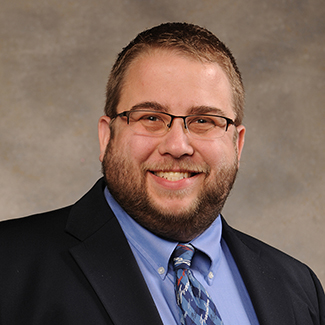 Adam Maksl, Ph.D. is an assistant professor of journalism at Indiana University Southeast, where he teaches digital journalism and social media classes, advises the multiplatform student news laboratory and researches news and media literacy. Maksl’s research has been published in top-rated journals including Journalism & Mass Communication Quarterly, Journalism & Mass Communication Educator and the Journal of Media Literacy Education, among others. Maksl’s teaching focuses on multimedia storytelling, reporting, and communications law.  While at IU Southeast, Maksl has led a redesign of the journalism program’s curriculum to focus on digital journalism. As part of these changes, Maksl developed and taught new courses in online journalism, multimedia storytelling and social media strategies. Maksl has worked to integrate experiential learning into his courses, including partnering with community organizations and media companies. Maksl has consulted with the American Society of News Editors (ASNE) for more than four years in its annual newsroom diversity census, which works to measure gender and racial diversity in America’s daily newspaper newsrooms. Maksl’s teaching has twice been recognized with the Indiana University Southeast Trustees’ Teaching Award. His research record has been recognized with the campus Distinguished Research Award for Junior Faculty. Maksl spoke with academic information officer, Steven Krolak.

How is the journalism program at IU Southeast – the only one in the Louisville metro area – keeping pace with changes in the field?

We’ve made significant changes in the last few years to make sure that we are not only keeping up with the field but also in some cases trying new things that can help students become innovators when they graduate. For example, we offer several classes focused on contemporary skills, like learning to be a mobile journalist in our Online Journalism class, learning to effectively use design in our Visual Communications class, and learning to use social media effectively in our Social Media Strategies class. Many semesters, our faculty are working with students to try new things. For instance, this semester, we’ve purchased a 360-degree video camera, and I’m working with students to develop some video and photo stories that can be viewed online as well as on virtual reality headsets like Google Cardboard.

Because of the Internet, the role of the student-run news organization on a high school or college campus is much more expansive today than ever before. While The Horizon’s goal is to tell the story of IUS, some of our content resonates with much wider audiences. We have the potential to attract readers, and even have content go viral, in ways that could never have been imagined when our only way to tell stories was through a physical newspaper that stayed on campus. The Horizon has had stories go viral online. Because of this potential, I think students take “student journalism” very seriously. In fact, I tell my students that working on The Horizon isn’t “play journalism” — it’s the real thing. I also tell them that I don’t think of them as “student journalists” but rather as “journalists who happen to be students.”

Together with colleagues, you were awarded a McCormick Foundation grant to develop tools for measuring news media literacy in 2011. Why is this such an important area in journalism instruction?

What has been the impact of new media on communications law?

Often, technology moves much faster than the law, and lawmakers and courts are constantly trying to determine how to apply older laws in new, digital contexts. In communications law, we have seen a lot of these issues pop up recently, in areas ranging from copyright, to open records, to free speech issues. I study speech and press freedom, particularly in educational contexts like high schools and universities. We’ve seen in those areas problems arise because of technology, and courts struggle with how to apply the First Amendment. For example, in their quest to curb cyberbullying, high school administrators (and even some on college campuses) are increasingly punishing students for off-campus speech, even if that speech never causes disruption or problems at school. Doing so has potential to chill legitimate political or social speech, which is protected by the First Amendment. Courts are trying to balance competing interests, and there’s still not a national standard.

In your work with ASNE’s diversity census, you have charted progress, and lack of same, in the news industry. Why is diversity so crucial in this field?

Journalists are essentially community storytellers, so having journalists who are representative of the diversity in our communities in vitality important. Journalists are often thought of as being objective, able to cover any story free from bias or influence. But even though journalistic methods are objective and professionalized, the fact is that people can’t separate themselves from their own experiences or lack thereof. That’s why it’s important that we have community storytellers who have diverse experiences. Much diversity research — including the ASNE census and others — focuses on racial and gender diversity, but conversations about diversity in newsrooms involves more characteristics, including ethnicity, sexual orientation, and geography, for example. Our newsrooms are stronger — and our community stories are deeper and more authentic — when journalists are seen as a part of the diverse communities they are covering.

For more information about the journalism program at IU Southeast, contact Adam Maksl at amaksl@ius.edu or Ron Allman at rallman@ius.edu.